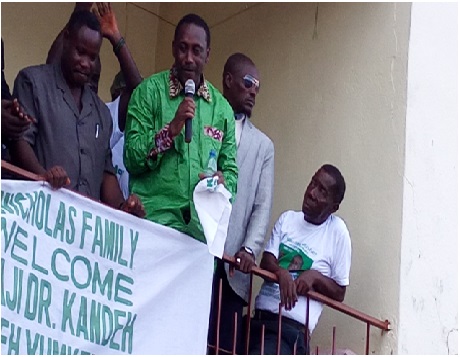 Addressing a mammoth crowd in Bo, Mr. Franklyn Rogers, who hails from that city, said he was touring with Alhaji Dr. Kandeh KollehYumkella to demonstrate their willingness for peace and unity to be restored to the SLPP.

The flag-bearer aspirant added that he was part of the former UNIDO Director General’s tour to also demonstrate to the people of Bo that Alhaji Dr. Kandeh Kolleh Yumkella is not only a strong member of the SLPP family, but a prominent figure in the globe.

Mr. Franklyn Rogers described Alhaji Dr. Yumkella as son of Bo who attended secondary school in that city before he proceeded to Njala University to pursue his bachelor’s degree with flying colours.

He pleaded for peace and unity which he said is the only way for the SLPP to win the 2018 elections and form the next Government.

Mr. Franklyn Rogers is a son of SLPP’s veteran politician, the late Hon. Daramy Rogers who also served as Government Minister during the one-party state between 1978 and 1992.

Alhaji Dr. Yumkella entered Bo city triumphantly and most of the SLPP stakeholders especially the elders heartily embraced him and participated in all the activities he carried out, including his visit to the Bo Central Mosque at Fenton Road to perform the Juma prayer where he delivered a hair-raising speech that moved the worshippers.

The former UN Secretary General’s Special Representative on Sustainable Energy for all also hada closed-door meeting with the Catholic Bishop on Saturday 30th November before he delivered lectures to University and tertiary students on the post-Ebola Economic Recovery challenges on the same day at Bo Club House.

On his way to Bo, Alhaji Dr. Yumkella made a stopover at Moyamba Junction where he was warmly welcomed by a large group of youth mainly women before his convoy proceeded to Bo.

He also made a brief stopover at Taiama Junction where a group of youths demanded to see him in person after they have had so much about him.