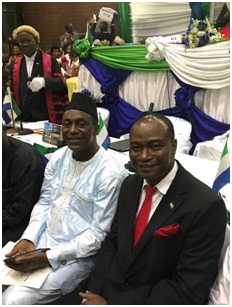 Whiles foreign dignitaries including diplomats, friends of Sierra Leone, donor partners, local and international authorities, family members and prospective voters for the 2018 polls were all around the House appreciating and thanking their Members of Parliament (MPs) for representing them in the House for five years now, a cheerful looking young man by the name Dr. Yumkella entered the Well smiling, hugging and shaking the hands of colleague presidential candidates, MPs and politicians from the various political parties in Sierra Leone that graced the event.

His act which many political analysts described as matured politics left the entire Well of parliament in cheerful atmosphere to an extent that some people viewing the event through their televisions at home and offices first thought it was their beloved President Dr. Ernest Bai Koroma that has entered the Well.

“Yumkella is a true and mature politician. Even though his political party, the NGC has not got a single MP as representative in the House, he is still happy to be here congratulating and hugging the them as if they were from his party,” a woman who saw it all told AYV Newspaper.

Throughout the hours-long event, Dr. Yumkella was in the Well of Parliament attentively listening and smiling as President Koroma delivers his 124 points speech where he proudly enumerated the successes of his government in spite of challenges and thanked the APC party and all shades of Sierra Leoneans for the confidence reposed on him to serve the country, with sincerity, commitment and purpose.

The president also described ordinary Sierra Leoneans as the true heroes of his transformative drives in all sectors, including health, education, energy, agriculture, infrastructure, and appointing women to take responsible leadership positions in the country.

Recalling ten years of governance under his watch, President Koroma espoused that in respect of compromises, agreements, and disagreements referring to the short-lived walk-outs that had been staged by the opposition, yet they were voting together with APC in the interests of ordinary Sierra Leoneans. He thanked Parliament for being supportive of his programmes and policies, by passing important Bills into law for the development of the country. He also said that the economy had grown under his watch, regardless of the reversals posed by Ebola and the drop in the prices of ore.

The event was held in accordance with Section 85(1) of Act No. 6 of the 1991 Constitution of Sierra Leone, which provides that the House stands dissolved following the date of its first sitting after the conduct of general elections.

First sitting of the dissolved parliament was on 7th December 2012, after the conclusive outcome of the elections conducted on 17th November 2012.