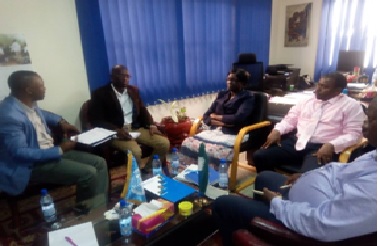 The Minister told the country Rep that he was in her office in two capacities: one as government Minister and as Youth of Sierra Leone.

The Minister called on FAO for partnership, technical support in Agriculture, food security as key thematic areas in the New Direction administration.  He however acknowledged the challenges FAO faces, but further implored them to swiftly come in to help address the growing youth unemployment.

Minister Bangura told FAO that “there is no way we can succeed as a nation if we do not reduce the rate of poverty.”

Owing to the fact that President Bio has recognized youth unemployment as a challenge to state security, the Minister used the opportunity to lobby FAO’s support in key areas such as agriculture.

It could be recalled that one of the successful models introduced in Africa is the Songhai Center in Benin Republic which provides Agricultural experts, Engineers among others. FAO has been encouraged to replicate same in Sierra Leone to help youth of the country.

FAO Country Rep Mrs. Nyabenyi Tito Tipo and the Head of Programmes-Mr. Joseph Brima noted that they were pleased with the Minister’s visit. They promised FAO’s continued support in the country and to the Youth Affairs Ministry.

FAO Country Rep stated that her institution will align its programmes to suit the President’s New Direction Manifesto as well as the President’s commitments during the State Opening of Parliament.

“Youth unemployment has become a global issue, hence FAO’s Rome Office is working hard to see how this could be addressed,” said Mrs.  Tito Tipo.

The Country Rep revealed that there are youth friendly projects in the agricultural sector which they will support.

Agriculture is one key area that has been prioritized by the ruling Government and it’s against this background that the Youth Affairs Ministry wants to use Sierra Leonean youth as a driving force to increase productivity.