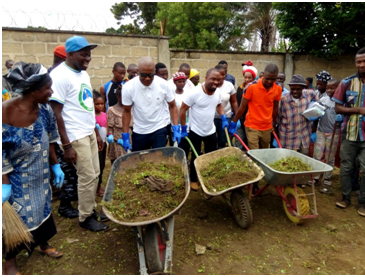 “This has been demonstrated today in Kono, 4th August 2018.”

According to her, a healthy hospital will speedily aid the medical treatment of “our patients to be effective and efficient.”

She added that the presence of Minister Kallon and his colleagues to fully participate in “cleaning the Kono Government hospital shows that they believe that a healthy hospital is a wealthy hospital.”

The Mayor of Koidu City, his worship Komba Sam stated that he was elated for the overwhelming support from the Government of Sierra Leone, adding that the New Direction is about national development devoid of party affiliations and regional background.

Whilst appealing to all Sierra Leoneans to come together and support the President’s vision, Mayor Komba said the turn-out indicates that his leadership is geared towards unifying the entire District. “Leadership is not only to lead but to bring your people together and allow them to participate in national development for the betterment of their communities,” Mayor Komba said.

“It was amazing to see many youth groups from different political parties coming together to clean the Koidu township,” Minister Lusine Kallon told journalists in an exclusive interview.

The Deputy Minister of Youth Affairs went on to state that he specifically decided to clean the Kono Government hospital because the patients needed a clean environment to breathe in good air, adding that their current situation cannot permit them to participate in the cleaning exercise.

“We are here to clean the entire precinct of the hospital,” he said, noting that, “their health is paramount to me and be assured that this exercise will sincerely help to improve their health status.”

The Deputy Minister of Sports Kai Lawrence Mbayo said he is an indigene of Kono and being part of his people to clean is an appeasement to him. He said President Bio made no mistake to give him an opportunity to serve his country “as service to humanity has been my innate priority.”

At Kaquima, Tankoro Chiefdom, the Deputy Minister was actively involved in cleaning the community field.  This, according to Minister Mbayo was part of President Bio’s vision to revive sports across the country. “And as a Ministry in charge of the development of Sports, we must be that vehicle to achieve this ambitious dream.”

There was a conducted tour to clean Kania, Sukudu, Kainkordu road, Sembehun road, Old Yengema road and Lebanon among others.