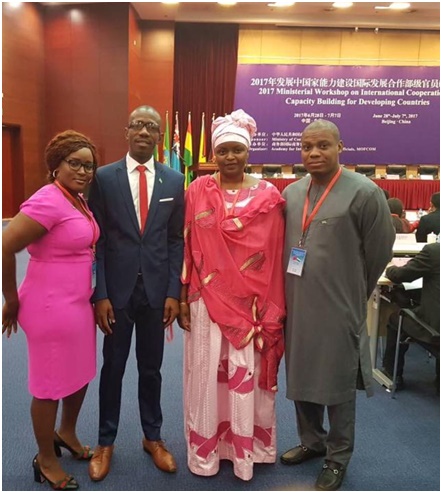 Hon. Bai Mamoud Bangura spoke on Wednesday, 28th June, 2017, at the start of the week long Ministerial Workshop on International Cooperation, which has brought together participants from various countries, including eight (8) from Sierra Leone.

Both countries, he said are collectively determined to firmly support each other’s development trajectory especially as they conform to respecting each other’s policies, strengthen exchanges, deepen strategic mutual trust and understanding, “as well as support each other on issues concerning core economic interests.”

Sierra Leone, he said, does appreciate the Chinese support towards ongoing Post-Ebola recovery initiative undertaken by the Government of Sierra Leone, also paying tribute to the Chinese for their role in tackling the ebola virus few years ago.

Sierra Leone, he assured, will continue to welcome investment from Chinese enterprises, saying, those already in the country are playing a crucial role in job creation “and in the process building capacities.”

On the diplomatic front, minister Bangura said, since both nations entered into bilateral and diplomatic relations in 1971, there continues to be postage outcomes for both countries. Sierra Leone’s relationship with China, he said, has moved to a strategic level as seen in the increased involvement of Chinese in economic investments in the country.

Speaking further, minister Bangura referred to the workshop as “another milestone” to strengthening policy coordination and expand the scale of trade and investment, enhance cooperation in fields such as energy, construction, science and technology, and finance between the two nations.

In 2016 alone, China, he said, ensured stronger bilateral cooperation agreement with Sierra Leone in various sectors, as was witnessed during the State visit of His Excellency Dr. Ernest Bai Koroma to the People’s Republic of China.

He referred to the signing in 2016 of five (5) Cooperation Agreements; Economic and Technical Cooperation; Visa exemption for holders of diplomatic and service passports; Consultation Mechanism to communicate and coordinate bilateral relations and regional and international issues and Protocol on Debt Relief, all of which he said, are further manifestation of the growth in ties both at the level of diplomacy and people-to-people friendship.

The Youth Affairs minister was optimistic; the sessions will help in pushing forward the bilateral investment cooperation and speed up the pace of Sierra Leone’s institutional reform agenda.

The ongoing workshop targeting Ministers and policy makers from Sierra Leone is part of 330 Bilateral Training programmes and Seminars offered to Ministries, Departments and Agencies under the 2017 Chinese Government Short-Term Training initiative.

Minister of State 2, Foreign Affairs and International Cooperation, Madam Isata Kabia is expected to present a paper on 30th June, 2017, on strengthening capacity building and implementing the 2030 agenda for sustainable development.