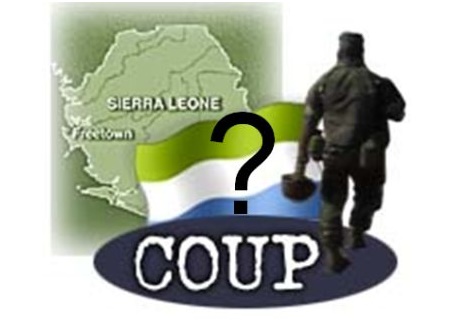 If such clause is inserted in the revised constitution as allegedly demanded by the ruling APC in its submission to the CRC, then it will have to affect not only the aforementioned names in the opposition SLPP, but also Mr. John Oponjo Benjamin of the same political party and Adviser to the President, Dr. Sam Sesay of the ruling APC, who served in the former NPRC junta as Secretary of State in the Ministry of Agriculture and Forestry and reportedly has the ambition to contest for the flag-bearership in the APC. Such clause will also disenfranchise Vice President Dr. Victor Bockarie Foh and other APC operatives that served the bloodiest military/rebel junta that overthrew the erstwhile SLPP Government on Sunday 25th May, 1997.

But why should anybody demand the insertion of such clause in our new constitution to eliminate Sierra Leoneans who worked for the NPRC junta from contesting the presidency of the Republic of Sierra Leone?  Is that not a recipe for chaos and national instability given that some of the former NPRC officials had already contested presidential elections in the new political dispensation that was ushered in since 1996?

If that dangerous clause is inserted in the revised constitution as reported by the local tabloid, it would be considered by many Sierra Leoneans, including the general membership of the main opposition SLPP and some quarters of the ruling party, as a calculated ploy to disqualify well-meaning citizens who have contributed immensely to both national and international development from contesting the presidency of their own fatherland.

The CRC should be very careful with the submission by the ruling APC that such vindictive clause should be inserted in the revised constitution because it would not be in the best interest of majority of Sierra Leoneans. If the APC Government actually believes in the implementation of the Truth and Reconciliation Commission (TRC) that dealt with all our past mistakes as a nation and proffered solutions to word off any recurrence of the turbulent period we went through, its party officials should not have thought of making such vindictive submission to the CRC which would only turn back the time.

The absurdity in the submission of the said clause by the governing APC could not be fathomed because even countries that were once notorious for military coups like the Federal Republic of Nigeria and Ghana had never attempted to insert any clause in their constitutions that would eliminate citizens that once served in their former military regimes.  Had that been the case, the likes of General (Rtd.) Olusegun Okikiri Obasanjo and General (Rtd.) Mohammad Buhari would not have ruled Nigeria as civilian Presidents, let alone Flt. Lt. (Rtd.) John Jerry Rawlings, who overthrew two civilian regimes and later served as President of the Republic of Ghana for two consecutive times. In fact, his successful economic reform and development strides in eight years have today made Ghana the darling of Africa where most of the regional conferences for Africa are held annually.  It was based on Ghana’s democratic credentials and good governance which foundation was laid by JJ Rawlings that when President Barrack Hussein Obama of the United States of America (USA) paid his first official visit to Africa as President, his first stop was in the capital of Ghana, Accra. So how Ghana would have become an enviable country in Africa if those that drafted her constitution had vindictively eliminated the former military Head of State from contesting any presidential election? Perhaps no other Ghanaian would have had the vision to make a turnaround in Ghana where she citizens used to queue up essential commodities like tooth paste, foodstuffs, you name it.

Small The Gambia is another progressive country where the former military Head of State is the current civilian President. He has reformed the tiny country to a standard which the previous civilian regime he overthrew never dreamt of despite most of the former administrators were more educated and experienced than the young former military Head of State turned civilian President. Most people in the former civilian Government of Dauda Jawara may have been hurt by Yayah Jammeh’s military coup in 1994, but the drafters of that country’s constitution did not make any attempt to eliminate people who served in the military regime from contesting presidential election; otherwise, Yayah Jammeh would not be serving as President.  It is therefore hogwash and vindictive for any group of persons or organizations to submit to the CRC that those who have served in a military regime should be disqualified to contest for the presidency of Sierra Leone. Such clause will have the potential to not only plunge this country into national chaos and instability, but it will also undermine the very democracy Sierra Leoneans sacrificed their lives for.

I believe that instead of vindictively eliminating our compatriots that have served in military regimes particularly the NPRC, they should be hailed for fast-tracking our democracy which the old APC regime of the late former President Joseph Saidu Momoh was about to compromise to ensure they remained in power no matter whose ox was gored. So if the current APC regime saw the necessity of including dozens of Sierra Leoneans, who served in the NPRC junta, in the Koroma administration, why should the others on the other side be eliminated from contesting for the presidency of this country?  The likes of the Minister of Foreign Affairs and International Cooperation, Dr. Samura Kamara, former Minister of Agriculture, Forestry and Food Security (MAFFS), Dr. Sam Sesay, who is now Adviser to the President, Minister of Sports, Mr. Paul Mohamed Kamara, Finance Secretary, Mr. Edmund Koroma and many others in the Koroma administration dutifully served the former NPRC. And today, they are still very instrumental to national development. Had such clause existed in our constitution, the country would have lost such talents now contributing exemplarily to national development.