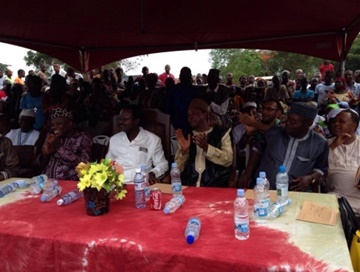 In presenting the Paramount Chief to the people of Maforki, the Hon. Vice President took the opportunity to address the APC Party supporters, particularly those wishing to succeed President Koroma.

” Let us for now put politics aside and remain focused on the success of President Koroma’s Agenda. It is only when President Koroma succeeds that the APC will continue to remain in power” admonished the Hon. VP. He affirmed that the APC is a party that rewards hard work and loyalty, citing himself as a perfect example.

The Hon. VP urged the people of Portloko to unite and reconcile their differences.

“The APC is a Party that bears no grudge” declares the Vice President. “My coming here today, with the former Head of State, Rtd. Captain Valentine Strasser, is a symbolic move of reconciliation and national cohesion. It points to the fact that we hold no grudge against anyone” he reiterated.

He also informed the gathering of his now brotherly relationship with the former Vice President and Flagbearer of the SLPP, Solomon Ekuma Berewa, who had once prosecuted him for treason and the bond he has formed with the Hinga Norman family. All this, he stated, “points to the fact that we must unite as a people, forgive one another and forge ahead as a nation.”

The program was chaired by Councilor I S. Bangura.