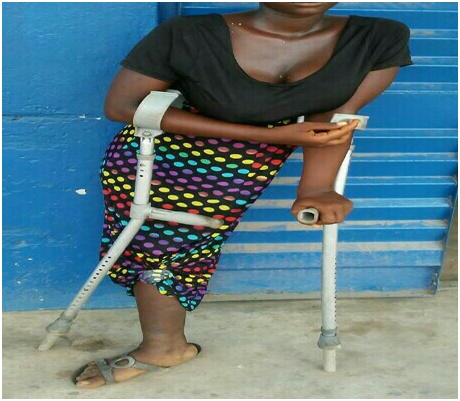 Zainab was alleged to have been impregnated by a shop keeper who resides at Waterloo in the Western Rural district, when she went on a holiday vacation to her aunt, but that shop keeper has refused to shoulder her pregnancy.

This press learnt that the shop keeper was reported at the Family Support Unit of Waterloo police station by Zainab’s relatives, where he was cautioned and compelled to take full responsibility of Zanaib’s pregnancy, but that the shop keeper cooperated for only a month, before he abandoned her and went into hiding.

Her grandmother, Ya Sallay Conteh who has been frustrated over the whole incident stated that the victim lost her mother three days after she was born, following her escape from rebels strongholds in Kono and Tonkolili districts, during the country’s eleven year civil conflict.

Madam Ya Sallay Conteh narrated that Zainab”s mother,  Fatmata Conteh was brutally killed by bomb explosion from a  jet fighter, and it was there and then Zainab left foot got badly damaged, by fragments , and it was later amputated.

She is said to have become very dissatisfied and unhappy with the snail pace manner in which personnel at the Waterloo police station treated the matter and their failure to compel the shop keeper to responsible for Zainab’s pregnancy.

Before now, the victim was been assisted by a certain, Alimamy Edward Kamara, a Sierra Leonean residents based in  New York city, United States of America, who is also proprietor of one of the only schools for persons with disability  called Comfort and Care Primary School based in  Magbenteh, Makeni in the northern part of Sierra Leone.

AYV also gathered that Zanaib later took to begging and was living with her grandmother, in an amputee came at Mabap village in the outskirts of the Makeni , but that philanthropist Gloria Jones has decided to take full responsibility of Zaniab Bangura’s pregnancy, until she gives birth.

Madam Gloria Jones knew Zainab in Makeni few years back, and she had always been a friend of her, and during those periods, she would advise her not to depend begging throughout her life

In a brief conversation with Zainab, she told the press she was prepared to go back to school after her pregnancy, but that life was very difficult and unfavorable for her and wished the shop keeper could come out of hiding and take care of her pregnancy.

“I am very pleased that Gloria Jones has intervened and I will ever remain grateful to her for coming to my aid at a very difficult period in her life time,’ Zainab asserted.

Up to press time, personnel at the Waterloo Police Station could not be reached for comments with special reference to Zainab grandmother’s allegation.