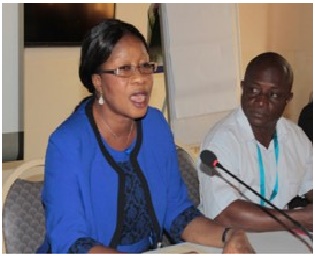 In her opening statement, NaCSA’s Senior Director, Monitoring and Evaluation, Dr. Susan Robert emphatically expressed the critical role of journalists in ensuring the protection of refugees.
She added that the seminar would serve as a “platform [in] understanding the responsibilities and roles of stakeholders in protecting refugees and asylum seekers.”
Dr. Robert stressed on the importance of media practitioners in understanding the role of UNHCR and NaCSA in addressing refugee issues, especially when the media has the power to change perception.
The Senior Director also noted that refugees at times are clueless as to what they want, adding that it is their duty as a commission to guide and protect irresolute refugees on what to do.
Dr. Roberts also pointed out  that refugee related conventions which Sierra Leone is a signatory to have been domesticated to ensure the protection of refugees.
Yusuf N’Gobeh also emphasized that the seminar is to “introduce participants to international protection of refugees; to explain the role of government and stakeholders in refugee protection; to enhance understanding of UNHCRs operations in Sierra Leone and to build partnership with media on refugee protection.”
In her lucid presentation, UNHCR Officer-In-Charge, Moijama Siafa explained that the Commission works in close collaboration with NaCSA, Ministry of Foreign and Internal Affairs by providing support to government to carry out its obligations.
She explained that UNHCR mandates are voluntary repatriation; local integration and resettlement to a third country; however, since 2010 there have been no resettlement.
Regarding the saga between a group who claimed that they were refugees and are entitled to certain benefits, Programme Manager, Mr. Mohamed Usman Koroma explained that there were 1,314 applicants for the Liberian passport, 1058 were granted passport while 266 were red coded.
He added that there are 427 exempted refugees, which Dr. Roberts said receive “material supports” from UNHCR from time to time.