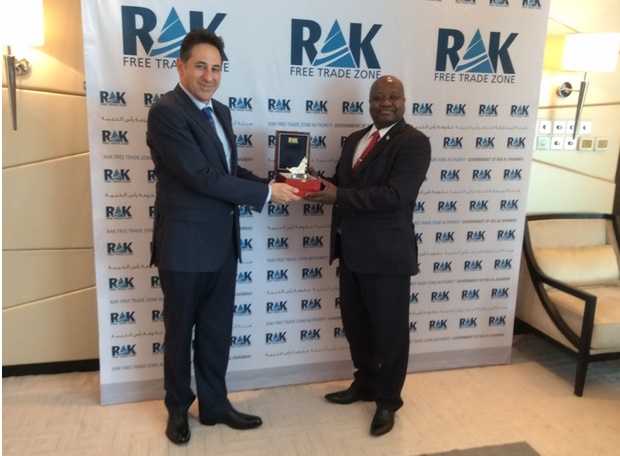 Ambassador Timbo added that, the Government of Sierra Leone is also keenly desirous to see how the renowned RAK ceramics, medicines and tourism of Ras Al Khaimah can be marketed in Sierra Leone.

The Envoy further said: “It is the earnest desire of the Government and people of Sierra Leone to ensure how best the Government of the United Arab Emirates can mutually tap the resources of gold, diamond, iron ore, coffee, cacao, citrus fruits like cashew nuts, to name but a few, for the benefit of the two sister countries.” (See the Ambassador’s full statement below the story).

Responding, His Highness Sheikh Saud bin Saqr Al Qasimi reiterated his desire to partner with Sierra Leone in order to attract new investments in Sierra Leone. During the meeting, the Ruler and the Ambassador discussed a number of social, economic and investment issues of mutual interest.

It would be recalled that Sierra Leone’s President, Dr. Ernest Bai Koroma in January 2014 paid a visit to the RAK Ruler when he visited the UAE at the invitation of the Government.

During their meeting, His Highness the Ruler extended another invitation to His Excellency the President to visit Ras Al Khaimah so that they could hold in-depth discussions toward the transformation and development of Sierra Leone.

Ras Al Khaimah is one of the seven emirates of the United Arab Emirates. The emerging emirate has affordable properties, world-class hospitality projects and easy access to other emirates, making it a preferred choice among families, business owners, and foreign investors.

As the UAE’s first point of entry in the Arabian Gulf, RAK is well-located and connected to destinations in the Gulf Corporate Council (GCC) countries and Middle East and North Africa (MENA) region, providing access to emerging and well-established markets in the region. The Emirate today has risen from its humble beginnings to being recognized as one of the most attractive industrial and business destinations in the Middle East.

In another engagement, the Ambassador also met with RAK Investment Authority’s (RAKIA) Chief Executive Officer, Ramy Jallad at the Authority’s headquarters in Ras Al Khaimah to discuss the possibilities of joint cooperation to boost trade relations and business opportunities for investors of both countries.

In their meeting, the Ambassador was given a presentation on RAK investment services, facilities and competitive advantages. The CEO also briefed the Envoy on RAKIA’s new developments and proposed different ways of promoting investments to enhance bilateral ties between RAKIA and Sierra Leone.

The Ambassador welcomed the proposals of Mr. Jallad and assured him of his country’s readiness to work with RAKIA and stated that the impressive investment potential is evident within RAKIA’s two Industrial Parks.

RAKIA presents a wide range of solutions and services, adhering to constantly meeting the requirements of its clients. Owing to the strategic advantages and investor-oriented policies, RAKIA is home to over 500 manufacturers and thousands of Small and Medium-sized Enterprises (SMEs).