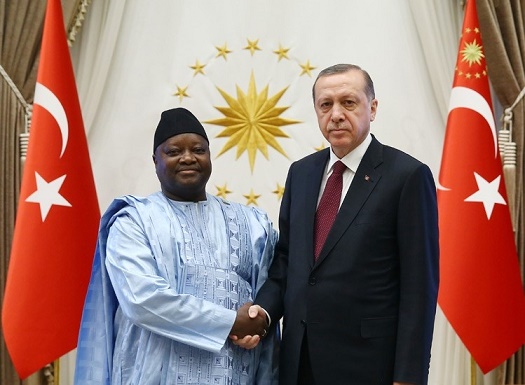 He also conveyed President Koroma’s best wishes of good health and happiness to the Turkish President and wished the Turkish people further progress and prosperity under President Erdoğan’s wise and dynamic leadership.

The Ambassador also used the opportunity to commiserate with President Recep Tayyep Erdoğan and the people of Turkey on the terror attacks across Turkey over the past few months which led to the loss of precious lives. He extended President Koroma’s most sincere condolences to the families, relatives and friends of the victims of the tragic incidents.

Reaffirming solidarity with Turkey in its fight against terrorism, the Ambassador said Sierra Leone condemns in the strongest terms the failed July 15 coup attempt and all terrorist attacks across Turkey.

“Attack on all decent, democratic and peaceful people should be condemned. Every terrorist attack only strengthens Sierra Leone’s resolve to stand shoulder to shoulder with Turkey and other countries in the frontline of the war on terror,” Ambassador Timbo said on behalf of his Government to the Turkish President.

About his appointment by H.E. President Koroma as Ambassador to Turkey, Ambassador Timbo said, it is a demonstration of the importance Sierra Leone attaches to the already existing cordial and bilateral ties between the two countries and promised to serve diligently in the interest of both countries.

The Ambassador also spoke on the importance of expanding the economic and political relations between Sierra Leone and Turkey and he promised that during his tenure, he would ensure that, cooperation is enhanced in every possible field. To achieve this goal, the Envoy pointed out to the President that, “I will be depending on the kind support of Your Excellency and Your esteemed Government.”

He also highlighted the visit of Sierra Leone’s Foreign Minister, Dr. Samura Kamara to Istanbul in April this year, which he said, took the bilateral relations with Turkey to a new level – a level, he promised to consolidate.

President Koroma’s Envoy also used the occasion to express thanks and appreciation on behalf of President Koroma, his Government and the People of Sierra Leone to the Republic of Turkey for its valuable support and contributions in the fight against the Ebola epidemic that ravaged Sierra Leone and other neighboring countries in the West African sub region. Ambassador Timbo also briefed the Turkish leader about President Koroma’s Agenda for Prosperity, which was well on its way when the Ebola virus disease struck in 2014 and caused all the plans of the Government to be placed on hold.

He also thanked the President for the Scholarships the Turkish Government and other Turkish sponsored Non –Governmental Organizations (NGO’s) are granting to Sierra Leoneans to further their studies in different Turkish Universities.

In accepting the Credentials, His Excellency Recep Tayyip Erdoğan welcomed and congratulated H.E Siray Alpha Timbo for his appointment as Sierra Leone’s non-resident Ambassador to the Republic of Turkey and wished him success in the discharge of his diplomatic assignment. H.E President Erdoğan also extended wishes of goodwill, good health and success to his colleague and brother, H. E President Dr. Ernest Bai Koroma.

On behalf of the Government and People of Turkey and on his personal behalf, President Erdoğan expressed condolences and solidarity for the loss Sierra Leone sustained as a result of the Ebola Virus Disease. “The suffering and the challenges caused by the Ebola scourge saddened us deeply,” the President said.

The President also sympathized with Sierra Leone for the outbreak of the disease and its impact on human lives and the national economy. The Turkish Chief Executive also pledged his country’s readiness to provide assistance to Sierra Leone’s Post – Ebola Recovery programme both bilaterally and through the World Health Organization.

The Turkish leader expressed gratitude for the solidarity shown by Sierra Leone’s leadership with the Government and People of Turkey during the attempted coup and the terrorist attacks across Turkey.

Welcoming the Ambassador, the Head of State highlighted new avenues of strengthening trade, commerce and economic cooperation between Sierra Leone and Turkey, while underscoring the need to deepen the bilateral relations between the two countries. President Recep Tayyip Erdoğan observed that that the present level of bilateral trade between Turkey and Sierra Leone does not reflect the potential of the two countries.

He further pointed out that opening of a Turkish Embassy in Freetown and operation of Turkish Airlines to Freetown will help to create an enabling environment for increased economic activity between the two countries – moves, he said, will be worked out through diplomatic channels in the not – too -distant future.

President Erdoğan expressed his country’s willingness to cooperate with Sierra Leone in every field, including; Agriculture, Health, Education, Energy, Mining, Aviation as well as the development of Small and Medium size Enterprises (SME’s) and to share their experiences.

He said Turkey and Sierra Leone should take every step to further develop the bilateral relations and cooperation between the two countries on the basis of mutual benefit. “I am fully confident that our relations will be further strengthened and diversified following the entry into force of the Agreement on Trade, Economic and Technical Cooperation (TETC) which was signed between our countries in 2012,” he assured.

The President affirmed to the Ambassador that he would receive all support from the Turkish Government and people to enable him carry out his duties as Sierra Leone’s non-resident Envoy to Turkey.

Concluding, the President encouraged the new non-resident Ambassador to pay regular visits of extended stay to Turkey, not only to Ankara and Istanbul but other cities like Izmir, Samsun, Antalya, Denizili, Trabzon, to name a few.

A day earlier, on November 21, as Protocols demand, the Ambassador Designate met and handed copies of his Letters of Credence to the Director General, Chief of State Protocol, Seviki Mutevellioglu, at the Foreign Ministry and had fruitful meetings with the Director Generals for Consular Affairs and African Affairs, Ambassadors Mehmet Samsar and Ahmet Raza Demirer respectively.

The credentials ceremony saw in attendance the Cabinet Secretary, Secretary to the President and the Under Secretary of State at the Foreign Ministry. The Ambassador was also accompanied to the ceremony by his Acting Head of Chancery, Allieu Badarr Mansaray, Sierra Leone’s Honorary Consul General based in Ankara, Sozer Ozel and the Information Attaché to Saudi and the Gulf States, M.B. Jalloh.