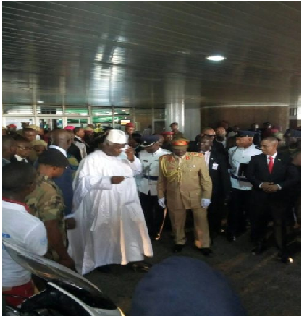 As Sierra Leoneans wrap their heads around the brazen display of their commander-in-chief’s penchant for telling untruths, at home and abroad, many confirmed what they always knew about Ernest Koroma and his lack of decency and integrity for the last ten years in office.

The Bankasoka story has become a nightmare  story for Koroma and his government, as current NGC flag-bearer looms large regardless of how the story is told to suit APC’s political narrative.

Regardless of how many times Bankasoka is re-launched, Kandeh Yumkella’s shadow can never be erased.

On the one hand, is a President who publicly acknowledged Yumkella’s leadership of the Vienna-based independent UN agency and his government’s gratitude, and by extension the nation, of the many projects that Sierra Leone has enjoyed and benefited from UNIDO under the the two-term former director-general.

President Koroma said on April 4 2012; “But as we are here today, all of us have to offer our deepest gratitude to UNIDO for a very fine job and the high-level delegation that has joined us today. My government and the people of Sierra Leone are truly proud of the many projects that UNIDO has and continues to undertake in this nation.”

“We are truly proud that Dr. Yumkella is providing exceptional leadership at UNIDO. With him, our flag is flying higher and higher each and every day. Some of us would want him to be the next Ban Ki-moon or to be any other person of global stature but we don’t know what comes next. But in all his endeavours, Sierra Leone wishes him the very best. Whatever good intentions we have for him in our country, we shall ask God to make it possible,” said the lame duck Koroma, as he paid a glowing tribute of his brother Sierra Leonean.

On the other hand, five years later, trying to change the true narrative which every Sierra Leonean knows and acknowledges with gratitude, amidst a difficult campaign and his sudden realization that his third term machination is all but foiled by the same citizens he has continually lied to, Mr. Koroma sang a new and awful Krio song that decent citizens wished he never sang.

The Krio song loosely translated began this way – “You know I like to say the truth. UNIDO did participate in the Bankasoka project in providing the initial feasibility and other things. They participated because UNIDO was here with us when we we began as a government. Thus, we say thanks to them  for the support they rendered us.” Having lost all the respect and credibility which Sierra Leoneans thought he had, he continued “Believe me, as a Sierra Leonean and as Ernest Koroma, from the country whose resources he and family has plundered, and in my desire to help Sierra Leone, I would have brought 100 or 200 megawatts,” to fake applause from an imported crowd that will soon send him packing.

The truth Mr. President is this:  UNIDO Member States would never have elected you as Director-General. Thus, let’s forget about what you would have done for Sierra Leone as the institution’s DG. Let’s focus instead on your presidency which you promised to run like a business.

We already know what yours look like. Given Kandeh’s record of global service, we know what would have happened if he were president of this nation. We know what he would have done if he had run this country as a business. Unfortunately, your record running Sierra Leone as a business is no secret: some of it is open secret and is as follows:

1. You have bankrupt the nation to its knees.

2. You have bequeathed a total of $2.5 billion debt to a whole generation of Sierra Leoneans – some unborn.

3. You have stolen Ebola money which you once said in Washington is blood money to buy votes. Sierra Leoneans will take it , eat it and show you just how disgusted they are with your 10 years in office.

4. You have made your immediate family billionaires overnight and a few more due to the quota system you have continuously encouraged because you get your own percentage.

In contrast, if Kandeh Yumkella had been at State House, his presidency would have been about the benefit of every Sierra Leonean to improve their lives and those of their families.

Had Yumkella been in office, all his interests would have been nothing but Sierra Leone and her citizens. He has demonstrated these same qualities as UNIDO Director-General, focusing on the interests of the 173 Member States who unanimously elected him to two-terms.

As you probably know but refuse to recognize – Kandeh Yumkella did not need to be president of the Republic to help Sierra Leone.

His record is clear and is known by all. In fact, the immense benefits Sierra Leone has enjoyed has been with him at the helm of UNIDO.

Since his tenure ended, not only was the office downgraded from a Representative Office to an ordinary Liaison Office which has seen the amount of project support decreased considerably.

Some of the current projects that have been implemented, are the results of Yumkella’s initiative, supported and approved before he left UNIDO.

As Kandeh said on April 4, 2012 at the original launch of Bankasoka, “ Good Development does not happen overnight.” Development takes time and Bankasoka is no different.

It took six years of sustained UNIDO efforts plus personal lobby and the interest of Sierra Leone to get it to where it is today.

Gratitude is one of the values I was taught as a kid growing up in Freetown. It is the same value that Sierra Leoneans are taught. It is why they recognize Dr. Yumkella’s work and appreciate his efforts regardless of the spin you give it.

Sierra Leoneans must not be taken for granted. They are tired and would wish you leave and retire in peace. Equally, they hope you know that since you live in a glass house, you should stay away from throwing stones.