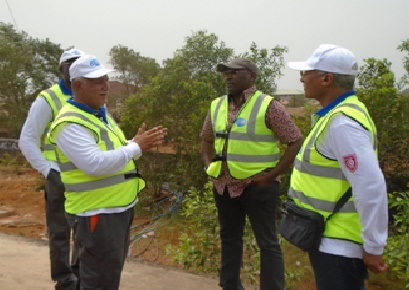 It is obvious that there is no government in the world that would provide jobs for all its citizens. But if there is electricity supply in the country, some of the unemployed citizens would prefer to embark on economic activities like charging of phones, cooling of locally made soft drinks, selling of ice to fishing communities, among other activities.

For communities in Sierra Leone to benefit from this life-changing commodity, there should be reliable and strong network system that should be able to transmit the capacity of load given to it.

However, the electricity transmission networks in Sierra Leone are over 50 years old. This has led to both technical and economic losses in the transmission and distribution of electricity supply to homes, offices, factories, among other places.

Because of the aging nature of the cables and poles in our energy sector, officials of the Ministry of Energy have recently embarked on load-shedding. This is done in order to avoid the overloading of the networks which might eventually lead to their destruction.  Load shedding is a measure of last resort to prevent the collapse of the power. It could also be defined as the deliberate shutdown of electric power in a part or parts of a power-distribution system, generally to prevent the failure of the entire system when the demand strains the capacity of the system.

I could remember when I told one of the staff working for the Electricity Distribution and Supply Authority (EDSA) that we have not got electricity supply for five days. His reply was “We are currently doing load-shedding because our network of cables cannot transmit more than the stipulated mega wattage. They could be destroyed if they are overloaded. So we transmit electricity to some communities after every five days.”

To backup that EDSA official’s respond, it is evident that when there is a heavy wind especially during the raining season, the cables and poles will fall to the ground. Obviously,most times one could see the cables sparkling when they are overloaded. Sometimes even if the transmission lines are given the stipulated capacity of megawatt, they can still sparkle.

This confirms that indeed the transmission lines have overdue and they should be changed if we are to start experiencing at least 12 hours electricity supply daily.

In order to address this problem of aging transmission lines, the Ministry of Energy, has about a year ago, contracted a Tunisian company called STEG International Services to do the procurement, installation and commissioning of the reinforcement and extension of the medium and low voltage network and the supply of prepaid meters and vending stations in the Western Area.

The project is funded by the Islamic Development Bank and its total cost is over eleven million United States Dollars (US$11m). It started in October 2015 and will be completed in December 2016.

STEG International Services is a subsidiary public utility company to the Tunisian Company of Electricity and Gas. It is a successful model of public private partnership (PPP). It was established to promote and share its experience and know-how acquired over the last 50 years in the planning, studying, implementing, operating and maintenance in the area of electricity and gas generation, transmission and distribution as well as energy management, energy efficiency, training and capacity building.

STEG International Services has extensive expertise in the establishment and operation of an electricity distribution infrastructure serving nearly 3.7 million customers and having a MV/ LV network of nearly 170,000 km and 65,000 MV / LV substations.

STEG has the level of expertise andknow-how to assist you at every stage of your projects from financial packageto completion, thus covering the entire development process from facility studies and planning to operation and maintenance.

The Tunisian experience in Electricity Distribution and especially in low-cost Rural Electrification is considered by the World Bank as one of the models best suited to the needs and means of African countries.

The major achievements of STEG-International Services  in the area of Electricity Distribution & Rural Electrification include :

(a)  Electrification of 55,000 households in the Eastern Province in Rwanda

(b) Electrification of 33 rural localities in four regions in Cameroon

(d) Construction of a MV/LV network for electrification of 9,700 households – Mbour Concession in Senegal

(f)   Technical assistance for the construction, maintenance and operation of the distribution network in Lebanon

(g)  Electrification work for the five district centres of the Sangha Department: Pokola, Ngombe, Ngbala, and the Centre of Sembé and Souanké in Republic of the Congo.

(h) Electrification work for the Mabimbo locality of the Bouenza Department, Republic of the Congo;

(i)    Electrification work for the Loudima (ex-SWAPO) Institute for Technical and Vocational Training (IFTPL)- Republic of the Congo;

(j)    Control and supervision of Rural Electrification work from the interconnected national grid in the Republic of the Congo;

(k) Rehabilitation, reinforcement and development study of the electricity distribution network in the city of Brazzaville, Republic of the Congo;

(l)    Implementation study of a new telex controlsystem for MV (35, 20 and 5 kV) distribution networks of the City of ANTANANARIVO, Madagascar;

STEG International Services can also accompany you in all stages of your projects, from studies and planning to construction, operation and maintenance of your facilities under highly advantageous business conditions and in line with international norms and standards of Quality, Safety and Environment.

STEG could as wellhelp to improve the networks in Sierra Leone as it has done in other African countries.

“Immediately after the signing of the contract in Sierra Leone, we proceeded to procure the project materials. All technical specifications were approved by the consultant before the shipment of the materials. We have got 95 percent of the materials needed for the project which include 10,200 prepaid meters, 6,685 wooden poles, 48 transformers, 21 package substations, among other items,” claimed Jamil Korked, Deputy General Manager of STEG International Services, in a meeting held at Radisson Blu Hotel to update the Ministry of Energy officials on status of the IDB project.

Mrs. Zainab Buya-Kamara, the Permanent Secretary of the Ministry of Energy, said they are pleased with the progress that STEG International Services has made so far. She noted that the cables are over 50 years old and that has been leading to technical and economic losses during transmission of power to the customers.

In all of the above, it is with a fervent belief that STEG International Services can handle the pressure of improving our electricity networks in order to avoid both technical and economic losses.