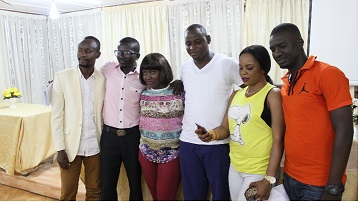 The ceremony was held at the headquarters of the Sierra Leone Association of Journalists in Freetown at the weekend. The newly-elected executives were declared unopposed.

Declaring the newly-national and regional executive, the Chief Electoral Commissioner of SLAJ, James Tamba Lebbie, pointed out that voting did not take place because all candidates nominated for the various positions in the national and regional executive; went uncontested and the Electoral Commission did not receive a petition against any candidate for the elections.

Speaking in an exclusive interview with AYV newspaper, the newly-elected Vice President of the SLRU, Princetta Williams, recounted that the work ahead of them is a daunting one because many reporters have lost interest in the Union.

She said they will have to be creative and innovative in order to revive the Union and ensure every reporter in the country becomes a member. Miss Williams revealed that they will have to embark on several projects geared towards rebranding the image on the SLRU. She maintained that social mobilization, capacity building through public lectures and training, are going to be their major focus, while adding that the welfare of reporters will also be of paramount concern to the newly-elected executive.

The elected Vice President further said they will be engaging media owners to advocate for members of the union to ensure they work under ideal atmosphere with the required equipments in order to maintain professionalism in the profession.

Princetta Williams works with the Africa Young Voices and earned close to a decade’s experience in Sierra Leone’s journalism landscape. She is a producer, presenter and reporter.

On his part, the President-elect, Amadu Lamrana Bah, who works for the Media One Center stated that they have been given a challenging task to accomplish, but with collective responsibility, he stressed, their tasks will be surmounted.

Mr Bah reiterated the need for social mobilization in order to get every reporter on board in ensuring that the union becomes a vibrant pressure group that will adequately seek the welfare of its members.