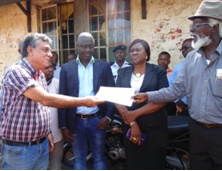 She promised that the operation will be positive and successful at this particular time, as a result of the four key objectives including the removal of abandoned vehicles form public roads and streets, redirecting public transportation, identifying potential streets to be used as parking spaces and also establishing a regulated parking regime.

Minister of Transport   and Aviation, Leonard Balogun Koroma described the current situation of our streets and roads as hideous and a situation he said responsible for road crashes. The minister admonished and encouraged SLRSA to carry out the operation without   fear or favor, noting that neither the institution nor the owner of the vehicle should be considered while executing the operation.

Many people, who spoke to AYV on the operation, commended the Sierra Leone Road Authority stating that the congestion and abandoning of vehicles have been contributing factor to many road crashes in Freetown. Most people are anticipating that the operation will be successful and promote road safety measures.