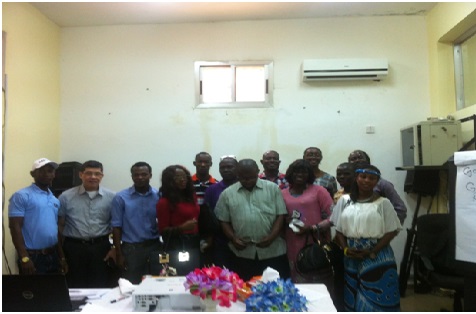 Speaking at the opening ceremony, the National Coordinator, Mina Horace said since joining the EITI in 2006, Serra Leone has produced 3 annual Reports covering payments and receipts from 2006 to 2011 adding that the 2013 Report will be published against 31st December 2015 followed by publication of the 2012 Report in early 2016.

While commenting on the successes of implementing the EITI in Sierra Leone, the National Coordinator said SLEITI has succeeded in building strong collaboration amongst government agencies including sub-national government for prudent management of the extractive sector adding that the setting up of a Mining Cadastre System and the Online Repository represent a significant step forward towards natural resources transparency.

Providing an overview of the Online Repository, the Revenue Specialist at the National Minerals Agency, Samuel Osborn Koli said the Repository is a web-based portal in which government natural resources information is published for review by stakeholders including MDAs, potential investors, CSOs, and international partners. He said, it currently holds mining cadastre and forestry administration information, but may also be used for other natural resources such as fisheries, land, and oil.

The training modules were presented by Theophilus Gbenda of the Association of Journalists on Mining and Extractives, SLEITI National Coordinator, and the Communications Officer, Mohamed Fernando Conteh.

This is the second time SLEITI has facilitated training on the use of Online Repository. In 2014, a number of CSOs, media practitioners, mining companies and related MDAs received similar training. SLEITI has significantly positioned capacity building for stakeholders in its work plan to ensure meaningful engagement in the EITI Process.