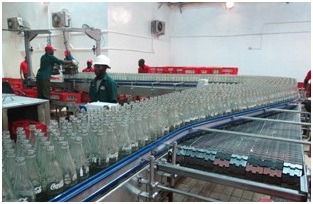 He explained that the €1.7m bottle washing plant was manufactured by Krones, a German company, which is one of the biggest manufacturers of bottling equipment in the world.
The Technical Manager also revealed that “this is the very first time in the history of this company we’ve installed a brand new bottle washing plant with the capacity of 31,000 bottles per hour;” adding that the previous machine, which was installed in 2003, was a secondhand machine from another facility in Europe, with a 25,000 bottles per hour capacity.
He noted that the newly installed bottling plant has “three key characteristics that put it above all the machines that we had before.”
Abib pointed out that the new plant “gives us a very good opportunity to meet the growing demand” adding that the plant is being run at 80% of its efficiency.
“Like I said earlier,” Abib stressed “the machine processes 31,000 bottles per hour and presently we are running the machine at 25,000 bottles per hour.” This means “there is opportunity to improve as the market grows.”
He added that the plant “helps us to maintain a system for the foreseeable future in terms of continuity in maintaining the quality and quantity of the product.”
The Tech. Manager further revealed, “the cleaning efficiency of the washer is 99.9%. This means that the bottles that come out of this machine are much cleaner and sanitized than that of the previous,” he said. “Consumers are assured of a better quality product.”
Explaining about the customization of the plant to meet Sierra Leone’s working environment, Abib explained that before the machine was manufactured, bottle samples from Sierra Leone with all its particles and dirt were sent to the manufacturers of the bottling plant in Germany.
“These bottles were then taken to a lab where the particles and dirt were analyzed and it was based on their findings that the machine was designed for Sierra Leone,” he said.
The Tech. Manager also revealed that the newly installed bottling plant has improved their efficiency.
Abib furthered that the previous machine deteriorated to the point that we were only able to generate like 400 cases an hour, now we are talking about 1,000 cases an hour “this means that it has enhanced our efficiency while no staff so far has been laid off.” He said the installation is the start of a line. “This is the first phase, over time we may be thinking of installing automatic packing and unpacking depending on the market needs,” he said.
The Tech. Manager said that the new plant provides opportunity for “us to learn a new state-of-the-art technology.”
He also noted that as part of the contract agreement with the manufactures they were given a 3-year warranty; additionally 12 operators went through rigorous ‘hands on’ and ‘classroom’ training for two months by the installers of the plant.
“As part of the package every six months the manufacturers will send their representatives for a month to do further training with local staff,” he explained.
Abib said that because the plant was designed for Sierra Leone, customized sensors and voltage regulators were fitted on the plant in case of power surge.
Speaking about sales, the Tech Manager said “due to the ebola outbreak and the subsequent economic downturn, in the economy this year our production volumes went down, however we are hoping that come next year production volume will increase about 20%,” he conjectured.
Abib said that now that they are having the right equipment we could produce quality and huge quantity of our products for the next 20 years.
He further noted that the prominent features of the plant are its label extractor, safety and eco friendliness.  “The water usage compared to the previous plant has gone down considerably which is good because of the water problems the community is often faced with.”
He also added that in terms of consumables of other utilities such as electricity it has also reduced considerably, “the chemical usage has also gone down considerably because everything is automated unlike the previous, which was manual.” “The machine has got sensors that monitor everything from the water, steam and even the caustic we use to clean the bottles and it has a superb safety mechanism to avoid accidents,” he averred.