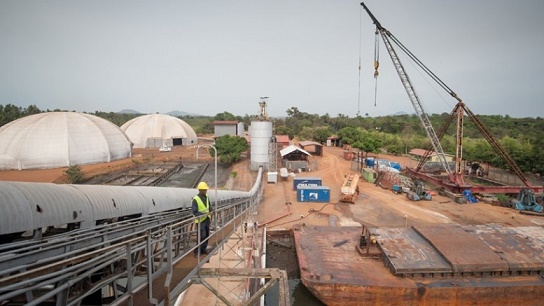 He explained that the meeting was a familiarization with the two mining companies to map out the way forward and also to look into some of their challenges and the successes already made over the years, as the peace of those mining communities rest on the shoulders of those companies.

Hon. Emerson said the continuous existence of the companies was eminent, considering their contributions to the socioeconomic development of the nation and employment, and at the same time had the moral obligations to protect the mining communities who they were representing in Parliament.

The Committee chairman added that the President had committed himself to revisit the Mining Act and other Agreements in the interest of the nation, thus giving them the task to engage the mining companies to have first-hand information on their operational sites.

Hon. Emerson also admonished the companies to build close relationships with the community people as the only way they could be able to run their operations, saying that all parties needed each other for co-existence especially the compensation for the loss of crops, lands and other related issues.

According to Sierra Rutile Acting Chief Executive Officer, Maurice Cole who also doubles as the Finance Manager, they consider safety and health issues paramount as they were also mindful of environmental hazards and incidents.

He disclosed that they had three operational sites: Gangama, Lauti and Sembehun and that they had invested US$600 million and also contributed to the country’s economy through the payment of 24.5 million United States dollars as taxes in 2017. But that, he noted, had increased to 817.63 million United States dollars which was direct payment to the Revenue Consolidated Fund.

The Sierra Mineral Holding (VIMETCO) Finance Manager gave a background of the company, saying that apart from their contributions to the national coffers they were also making steady progress. He noted that the company remained extremely successful in meeting overall technical, organizational and financial goals.

He explained that their operations are moving in line with the laid down rules of the land tenure system, and therein continue to increase production and sales volume over the last three years and also focus on exploration drilling portfolio to ensure constant replenishment of its current ore reserve base.

He said they managed to perform two trial shipments of dry benefited bauxite to establish an alternative avenue of producing additional commercial product to enhance its overall sales volume, as that besides their delivery to its parent holding; SMHL was successfully promoting the country’s bauxite in the international market.

Other Members of the Committee also asked relevant questions and raised concerns with the two companies, saying that the land owners and supposed beneficiaries’ cries are too much.