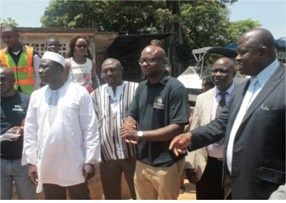 Giving a brief background about VSL, he said the agency started in 2004, “since then we’ve been trying to promote Sierra Leone in the international media. Speaking about VSL operations, he said, “we do cruise ship tour, we do city tours; for example, if someone is in Freetown and is new, we can do an orientation tour of the city. We also organize tours for various places not only in Freetown but also outside Freetown, such as Bonthe, Banana Island, Gola, Tiwa, also places on the Freetown Peninsular like Tacagama and other touristic sites.
He also added that they are looking forward to more agencies like VSL. “If we have 10 of VSLs it would definitely multiply the impact in terms of reaching more people to understand that Sierra Leone is open to business.”
However, he noted that because VSLs have been doing such tours for quite a while now “we have developed quite a lot of experience and knowledge over the years, obviously if someone is going to choose our agency they know that they have people who are experienced and more or less know what they are doing.
Speaking about their future plans, he said they would continue to promote Sierra Leone by reaching to neighbouring countries such as Ghana, Senegal and even the Gambia to see how we can link up with these people not only to get clients from them but also to see how we can get Sierra Leoneans to visit other countries as well.
“I think in the short and medium term we are hoping that Sierra Leone as a whole has a kind of consistent approach to how we reach the international market, because I think tourism benefits other areas in the country as well,” he explained.
Mr. Carrol also underscored that their relationship with the tourism industry is very good. “As a private company, we tend to interface more with the National Tourist Board. They have been very supportive since day one,” he pointed out, also maintaining that in 2004 “when we told them our plans they were very supportive.”
He disclosed that, “much of the information that we initially started with was provided by the National Tourist Board.”
“We interface with them directly when we want to reach out to the ministry, they’ve been there to provide support. As you can see, the minister was here today to welcome the arrival of the guests,” he stressed.