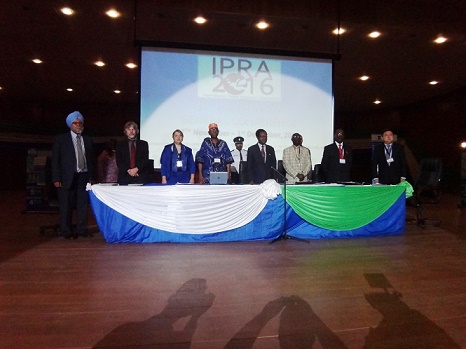 Sierra Leone went through a debilitating 11 years civil conflict which started in 1991andleft over50,000dead with countless more falling victim to the reprehensible and perverse behavior of the combatants. The war was officially declared over on 18 January 2002. The conference therefore provides a rare opportunity for peace researchers across the world to access more bottom-up perspectives of post-conflict and peacebuilding approaches. It is hoped that the dialogue would help position Sierra Leone as one of the leading laboratories for peace research in the region and the world at large.

Sierra Leone’s Vice President Victor Bockarie Foh, who officially inaugurated the conference, said the hosting of the event here was a significant expression of confidence in the country’s recovery after the Ebola epidemic, as well as “the further embedding of democratic governance after the civil war”. “I thank IPRA for considering Sierra Leone as host of this 26th Biennial Global Peace Research Conference,” he said.

He added that the choice of venue was no mistake as Sierra Leone had seen and experienced “the good, the bad, and the ugly” but that its resilience and determination to maintain peace had kept the nation progressing.

“It is great to see our country slowly but surely moving away from the devastating effects of one of Africa’s most brutal civil wars to peace,” VP Foh noted, stressing that the theme of the conference was timely. “Peace and development have defined our government’s engagement with the people of this country.”

Mr. Foh said Sierra Leone was contributing to global and regional peace by deploying peacekeeping troops in war-torn countries like Somalia and Sudan, as well as solidifying “building blocks for peace by strengthening institutions of human rights, security and the rule of law”. “We can boast of having one of the most quickly well-developed legal aid schemes in Africa. Our belief in democratic values and human rights cannot be overemphasized,” he said.

However, the Vice President cautioned that though Sierra Leone was regarded globally as a peaceful nation, economically it faces far more threats to peace resulting from the global economic impacts on the poor.

World Bank Country Manager, Parminder Brar, said the choice of Sierra Leone as host was apt considering what the country had gone through from the war years in the 90s to the Ebola epidemic in the recent past. He said in 2014, Sierra Leone was rated as the fast growing economy in the country but such progress was halted by the Ebola outbreak, which negatively impacted the mining sector with the fall in commodity prices, especially iron ore.

He said the country’s GDP is expected to record a growth rate of 4.3% in 2016 [from -21.1 percent in 2015]. He commended the government for its recovery efforts, and also for striving to maintain the peace.

Mr. Brar mentioned unemployment among youths and land management as two issues which, if not properly addressed, have the propensity of threatening the country’s peace.

“There is a huge demand to dealing with the great expectations of the youths to getting jobs. This poses a real social tension which requires the urgent attention of the government,” he pointed out. “Also, a lot of disputes in this country are related to the issue of land management. Addressing this issue is critical to the maintenance of peace and security in Sierra Leone.”

Also, the World Bank Country Manager mentioned the fact that Sierra Leone would be holding elections in 2018 for the first time [after the war] without the involvement of the United Nations, and therefore it behooved the government in ensuring the polls were held in a “free, fair, peaceful and timely manner”. He emphasized that it was also the responsibility of all Sierra Leoneansto ensure the peace the country currently enjoys was sustained.

Speaking earlier were the Secretaries General of IPRA, Dr. Ibrahim Seaga Shaw and Dr. Nesrin Kenar as they gave an overview of the Association and the objective of the conference.

Vice Chancellor and Principal of the University of Sierra Leone, Prof. Ekundayo Thompson, delivered the welcome address, while the event was chaired by the Deputy Vice Chancellor and Principal of Fourah Bay College (FBC), Prof. Sahr Gbamanja. The session was facilitated by Mrs. Memunatu Pratt, head of the Peace and Conflict Studies Department at FBC.

The conference ends on December 1.