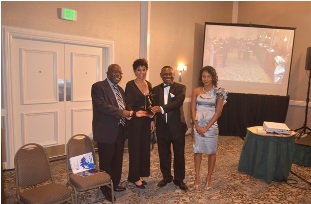 Praises were also heaped on Ambassador Stevens and the Embassy officials for mobilizing Sierra Leoneans in the United States and Canada and also preventing miss-information and get authorities involved in the noble and well intentioned battle fight.

On Friday, Ambassador Bockari Kortu Stevens represented all the Ebola frontline workers in Sierra Leone at a ceremony organized by Health Professionals in the diaspora.

Sierra Leone was one of the Honorees at the First Annual African Doctors and Nurses Ball in Bethesda Maryland.

This was the first ever gathering of African Diaspora physicians, Nurses pharmacists, Scientists, Health Professionals, Sponsors and Vendors.

According to Patience Emeni President Linked Ventures, “our goal is first to recognize the work this community does every day around the world: but most importantly to start a conversation about how they can be part of the solution to Africa’s healthcare crisis and global health challenges. According to her, a policy conference will follow this event in April 2016.

“We are honored by your presence Ambassador Stevens, to receive this honor on behalf of the Sierra Leonean people.”

Responding, Ambassador Stevens dedicated the Award to the Government and People of Sierra Leone and thanked the group for recognizing Sierra Leone. He paid tribute to all those people, community based groups, International Organizations, Bilateral & Multilateral Agencies and Countries which supported Sierra Leone in time of need.

He thanked President Ernest Bai Koroma for being a good intentioned Captain, who safely starred a ship in a wild whether. “All of us, (collectively) fought a good and well intentioned fight against Ebola because of the quality leadership the Country now have.

Also awarded were other professionals and organizations including Athena Viscusi of Medicine Sans Frontier who spent time in Sierra Leone and Liberia providing care to Ebola patients.

Responding, Ambassador Stevens gave a vivid picture of Sierra Leone before Ebola outbreak: he also gave an update on the effect of Ebola and the expectation of post Ebola Sierra Leone. He dedicated the Award to the government and People of Sierra Leone and invited members of ACBC to come invest in Sierra Leone.

In her keynote address, Asst. Secretary Bisa Williams spoke on trade between the United States of America and Africa and said, it has improved. She congratulated Sierra Leone for her victory over Ebola, praised the efforts of the International Community and recognized the resolve of Sierra Leoneans for the defeat of Ebola. She however cautioned for vigilance to prevent a rebirth. According to the Assistant Secretary of State, Sierra Leones economy was thriving but for the Ebola outbreak.

She said the US government will continue to support its partners. She also praised the other West African Ebola affected Countries and wished the best for all.

According to her, a meeting on trade of African leaders and President Obama scheduled for next year is in the plenary stage and assured the august body of an in depth deliberation between United States and Africa for improved trade relations between the two continents.

Earlier, Dr. Roger Kounga President of ACBC paid tribute to his predecessor Dr. Azuka, and said he has raised the bar of the association, set a higher standard and took the best action and extoled a high sense of leadership with an un-quenchable desire to do the right thing for the community. During his leadership, Dr. Azuka understood the challenges of access to capital and fought for the charter of the first African and Caribbean Credit Union.

Dr. Kounga promised to keep the flag of ACBC flying.

On Friday November 20, 2015 several mosques in the Washington Metropolitan Area during their Juma prayers offered different prayers of love for Sierra Leoneans, peace and stability in the Country and wisdom for authorities to govern. They prayed for Ebola victims and members of their families, and also prayed for Allah’s mercy to reign continuously on his people to prevent a re-occurrence of Ebola and any of its kind in Sierra Leone.