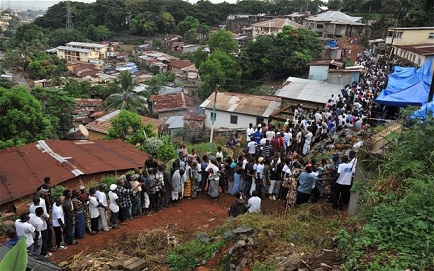 It seems the ruling APC party are not happy with some of the recommendations made in the report for constitutional change, including limiting the powers of the president.

But while that row is still playing out with much uncertainty as to the outcome, there are new fears the ruling APC party may be contemplating delaying the holding of parliamentary and presidential elections in 2018.

Last year, government officials announced that those elections will be held no later than February, 2018. But the exact date is not yet known, and there are doubts the ruling party has officially accepted the February 2018 deadline.

The date set for elections in Sierra Leone is of significance for holders of public office that are contemplating contesting those elections. According to the country’s Constitution, public officials nominated for elections must have vacated their public office at least twelve months prior to the date of the election.

On Monday, 28th November, 2016, the country’s election watchdog – the National Election Watch (NEW) issued a statement, calling on the Electoral Commission to immediately publish the specific dates when the 2018 elections will be held. This is what they said:

National Election Watch (NEW) has closely monitored preparatory activities for the 2018 Presidential, Parliamentary and the postponed Local Government Elections and now calls on the National Electoral Commission (NEC) to declare by proclamation the specific date the elections will be conducted in February 2018 .

This call underscores the fact that the date for the elections has implications for would be aspirants in public office. By law for anyone to contest the election as member of parliament such a person if paid from the consolidated fund must resign his/her employment twelve (12) months before Election day.

NEW is equally concerned that the undue delay in pronouncing the actual election date does not create a level playing field in the electoral arena, since the date is set by the Chief Electoral Commissioner in consultation with the president.

NEW urges that this important phase is completed and the date declared without further delay.

NEW commends NEC for the transparent manner in which they have conducted activities leading to the elections so far including the boundary delimitation exercise for which Boundary Delimitation Monitoring Committees were set up at national as well as district levels with composition from other Election Management Bodies, election stake holders and civil society representatives.

NEW is however concerned that the electoral calendar is under potential threat of not been respected due to government’s current engagement with re-districting (i.e. dividing districts and creating new districts).

This action has serious implications for the electoral calendar and will nullify the work done on the boundary delimitation so far; it would mean re-doing the exercise all over again.

The cost implication by no means speaks to the current economic situation where austerity measures have imposed so much suffering on the people of this country.

The time involved in re-doing the boundary delimitation will also require a new electoral calendar that will undermine the constitution of this country.

Furthermore, NEW wants to call for the appointment of a substantive chairman for the Political Parties Registration Commission (PPRC) as this must be addressed immediately.

NEW wishes to restate the important role of the PPRC as the Institution responsible for registering and regulating the conduct of political Parties and their supporters.

NEW is happy that NEC is now taking the lead in the development of the voters register and their participation in the ongoing recruitment process of registration staff for the 2018 elections is welcomed.

Noting however that too much conflicting information on the process have gone out to the public, NEW urges NEC to immediately engage in a rigorous civic education campaign so that citizens are not disenfranchised because they could not get the correct information on the voter registration exercise.

NEW also notes with concern the continuing shift of the registration date, moving from October 2016 to December 2016 and now to February 2017.

This signals an indication of unpreparedness and therefore NEW calls on government who has taken 100% responsibility to fund the exercise, to honour this commitment in order to ensure the voter registration is done in time respecting the constitutional provision.

NEW would like the public to know that its electoral observation effort is to add value to the entire electoral cycle through activities that allow for greater participation of citizens in the process to ensure citizens’ ownership and confidence.

As a way to engage with the entire electoral cycle activities in an organized and focused manner, NEW is in the process of developing a consultative 2017 -2021 Strategic Plan.

NEW is a coalition of civic and non-governmental organizations, operating from 8 Sawi Drive, Off Kingharman Road, Freetown.