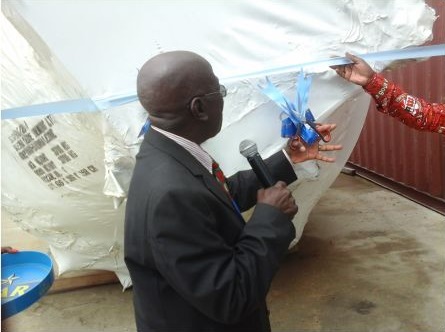 He said he recalled a couple of weeks during their engagement with the Acting Minister of Trade and Industry where they discussed strategies of creating an avenue to enable direct selling of their products to small and medium scale enterprises as an initiative to develop local businesses in the company’s supply chain.

He revealed that the said initiative culminated in the engagement of various cooperative associations through the Department of Cooperative within the Ministry of Trade and Industry, noting that the need to encourage trade at this level of their business cannot be over emphasised as they have embraced this new development because it crystallizes their ambition to reach every community in the country at all levels which he said can be enhance and realised through sales channels as it is the intention of his company for its high quality products to be readily available and at affordable prices country wide.

He also stated that using the local cooperative associations can be a source of tapping supply and gaining the loyalty and acquiring the required sales volume, adding that such an initiative is part of the company’s Post Ebola Recovery Programme.

Unveiling the scheme, Mr. Ngana said they will offer an agreed quantity of one thousand cartoons equivalent to the tune of one hundred million Leones with free delivery and no interest rate of their products on a two week revolving credit to the cooperatives which he said will be on trial for six months with plans to extend it if they get the support of the line Ministries in the provincial areas.

He maintained that part of their corporate social responsibility is to support community business in the country where they operate.

He lamented that the Brewery products are losing customers to foreign imported drinks who pay no taxes and do not employ citizens but while they pay billions of Leones in taxes to Government, donate to various Government and non-Governmental organisations and assist individuals in emergency situations.

He appealed to Sierra Leoneans to join them in promoting their products and stop consuming foreign liquors as the company is a true national company.

In her statement, the Acting Minister of Trade and Industry, Mrs. Mabinty Daramy, called on various traders to cooperate with the Brewery as it is a true Sierra Leonean company which has contributed to the development and progress of the country’s economy.

She pointed out that the company has always being donating huge sums of monies to individuals, communities, societies, Government and non-Governmental organisations in order to complement Government’s efforts in eradicating poverty and strengthening the economy.

Mrs. Daramy said in a business it does not matter the amount of capital one may start with but how to maximise profits and manage the business stands paramount, adding that trade is a vital subject as its practice contributes greatly in bettering he lives of the people.

She concluded that even though trading may be an easy vacation, what is difficult to achieve is moving from a petty or micro trader to a well established and developed business enterprise.