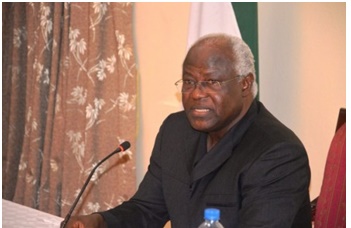 Two months ago, there was widespread disquiet on the streets of Freetown, in response to the government’s refusal to reduce the pump price of fuel, despite falling global oil prices.

And now, it’s the water and electricity crisis that has become the bugbear of president Koroma and his ministers.

It is understood that several groups, including students and school children are planning to stage peaceful street protests in the coming weeks.

But president Koroma’s banning order may now be seen as an open invitation to street confrontation with the police by disgruntled youths.

“The president has noticed with grave concern that in recent months representatives of various organisations, groups and stakeholders have on several occasions assembled outside the precincts of state house to register protests over the handling of pertinent issues by government ministries, departments and agencies.

“It should be noted that such protests have a disruptive influence on the peace and quiet of the presidency.”

Is the president’s peace and quiet more important than the welfare of the people of Sierra Leone? This must be seen as a shameful and lazy politics of a dictator. It is time for president Koroma to take leave of office.

“Quite apart from the fact that those who organise such protests do not obtain prior approval from the Sierra Leone police, the targeting of state house as their first port of call is unacceptable. Indeed, they should first seek redress from the sectoral ministry, department or agency of government within whose competence the matter lies.

“The general public is hereby informed that with immediate effect the staging of protests outside the precincts of state house is strictly prohibited. Anyone who contravenes this order will face the full force of the law.”

But civil libertarians in the country say that this presidential order is a serious infringement of the constitutional and human rights of citizens of Sierra Leone to peaceful protest.

And what is clear is that the ruling APC is increasingly becoming despotic, despite lofty claims by senior ministers and party officials about their democratic credentials.

Critics say that the ruling party’s ethos and values are deeply based on an anti-libertarian ideal, which sits comfortably with communist China.

Government oppression and the curtailing of civil liberty, through the use of heavily armed police tactics is once again being used by the ruling APC, as it did with deadly consequences in the 1970s and 1980s.

According to local media, a group of civil society organisations held a press conference in Freetown, where they called on the Board and senior management of the capital’s water supply company – Guma Water Company to step down.

The group, calling itself – the ‘Civil Societies for Safe and Available Drinking Water’ met on Tuesday, 10th May, to demand an immediate resolution to the water crisis in the capital.

Its leaders say that they have given management of the Guma Water Company twenty-one days to start supplying clean drinking water to households in the city, or resign.

They are calling on the minister for water resources to take full control of the water company and demand accountability by the national commission for privatisation, for millions of dollars they received for the improvement of water supply in the city, since president Koroma came to power over eight years ago.

Failure to meet these demands, the group says will result in widespread street protest involving mothers and school children.

As a result of this demand by this and other groups in the city, president Koroma has today issued his protest banning order.

It remains to be seen, whether frustrated youths and school children, along with angry civil society groups will take heed of president Koroma’s dictatorial orders.

Since coming to power over eight years ago, electricity supply in the capital has dwindled by 50%, from a paltry 30 Megawatts to an intermittent average of about 15 Megawatts a day.

Freetown alone needs over 500 Megawatts of electricity a day, to keep households and businesses running. But in the last six months, less than 10% of households in the capital have had access to electricity.

This crisis is set to get worse, despite yesterday’s lofty promise by the government of solar power for every household by 2020, at an estimated cost of almost $1 billion.

But who will pay the cost of solar electrification across Sierra Leone? The British government? The World Bank? The IMF? President Koroma?

Is this yet another massive gravy train for corrupt government officials and their business cronies, before the ruling APC leaves office in 2018?