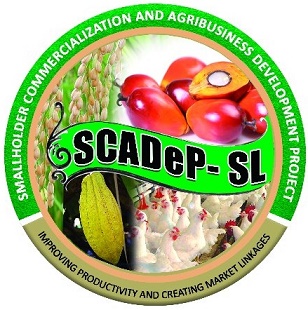 The five years long project aims to boost 50,000 farmers as direct beneficiaries across the country.  The project is a five years programme that seeks to promote agricultural productivity through improved access to markets, finance, as well as the development of inclusive smallholder farmers -agribusiness linkages in the targeted project areas of Sierra Leone.

SCADep Project Coordinator, Sulaiman Sesay established that the project worth $55 million United States Dollars, $40 million USD from World Bank and a grant of $15 million USD was provided by DFID for the rehabilitation of feeder roads. Sesay disclosed that the project happened to be a project in the Ministry of Agriculture Forestry and Food Security, and that the project focused its intervention towards helping the agricultural sector to recover quickly from the effects of the Ebola epidemic and to contribute towards higher medium to long-term agricultural growth in essence to reduce extreme level of poverty among the smallholder farmers and promote shared growth.

He further explained that the project tends to benefit farmers, processors, marketers and everyone that involved in the process of producing agricultural produce.

Abdulai Shaw an engineer representing the Ministry of Works stated that Agric-business happened to be a strong pillar of national development.  Owing to that he encouraged media practitioners to promote national developmental agenda by popularizing the meaningfulness of the project. He mainly emphasized on roads linkages, as the project development objective is to promote smallholder commercialization by fostering productive business linkages between smallholder farmers and selected agribusiness firms and other commodity off-takers in Sierra Leone.

Ministry of Local Government and Rural Development representative, Michael Amara Samai, the Acting Director of Rural Development uttered that the project happened to be a unique one, as a result of the fact most of its stages emanating from the local people who are the target beneficiaries. He noted that the goal of the project in simple term means helping the country’s small farmers as well as transforming them from peasant farmers to commercialized farmers. He stated that sensitization about SCADep is currently ongoing across the country.

The key value chains supported under the aforementioned project are rice, cocoa, palm oil and poultry. The project fosters support to agribusiness-farmers linkages and Small and Medium-sized Enterprises SMEs along selected agricultural value chains. This aspect mainly designed to strengthen linkages between agribusiness firms and farmers as well as promoting producers association and SMEs linkages along the four selected agricultural value chains, the project aims at improving access to finance through a combination of matching grants scheme or lending facilities and technical assistance, Abraham Karl Samura, Communications Officer SCADeP mentioned. Karl also encouraged media practitioners to adequately relate the importance   of SCADeP to the project target beneficiaries as well as the people of Sierra Leone, as he called on journalists and Sierra Leoneans to invest in agriculture for the positive transformation of the country as well the individual that involved in agribusiness.

SCADeP will also fund and facilitate the rehabilitation of up to 500 kilometers of feeder roads in selected areas of the country, with high potentials in agricultural production, processing and marketing.

The project cut across the nine agricultural districts of Bo, Bonthe, Moyamba and Pujehun in the Southern region, Bombali, Tonkolili, Kambia and Port Loko in the Northern regions, and the Western Area Rural District in the western region of Sierra Leone.

50,000 smallholders farmers, of which 40% will be women and youth involved in farmers, together with other beneficiaries include agribusinesses, agribusiness SMEs, government officials and other institutions which provide services necessary for smallholder commercialization and agribusiness development in the country, will benefit from the project.