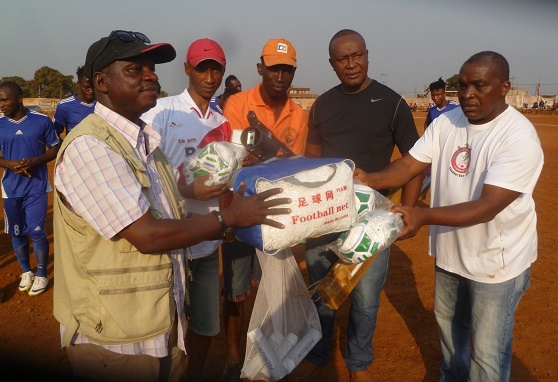 Presenting the items which included Footballs, Nets, Spraying cans Whistles, Flag posts, Red and Yellow Cards, a member of the foundation Max A. Konneh said  the foundation, was founded by  Bundu Hayes, one of Sierra Leone’s most outstanding Sports writers, Referees and Sports  Promoters based in Texas, USA. Mr. Konneh said the items will enhance the activities of the association which was hitherto finding it difficult to acquire such materials and thanked A.S.P.A. for a well organized and structured football league. He appealed for unity among sport stakeholders and entreated them to renounce violence and always observe FIFA’S principle of “Fair Play” and the Olympic mantra of “Everyone is a winner”.

Mr. Konneh pledged his organisation’s continued commitment to promoting sports in the country and hoped the items will be used for their intended purposes.

“As a son of the soil and football veteran, I will do my utmost to ensure the game of soccer is restored to its former glory, Mr. Konneh vowed.” Receiving the items, Chairman of ASPA, Abu Bakarr Kamara thanked the donors for their intervention, describing it as the first ever gesture made to them since the formation of their association. He outlined a number of challenges facing them including, lack of enough funds to develop other activities such as the construction of a perimeter fence, and other sporting disciplines. He also appealed further assistance in the form of trophies and other prizes for future sports competitions.