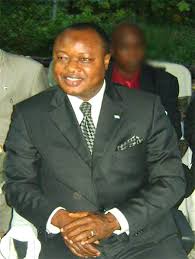 Sources say it took the intervention of the police Inspector General to convince the immigration officers that Sam Sumana has no case to prevent him from travelling out of the country.

Whatever prompted the delay on the part of the immigration officers, causing embarrassment to former VP at the airport, just as in the case of his arrival when his diplomatic passport was seized, remains a mystery.

While the public will easily suspect an instruction from above to embarrass the ex-VP for obvious reasons, the police I.G claimed that the issue was solely between Sam Sumana and the Immigration Office and not of any external interference.

However, he later received the travel permission and landed at the Kotoka Internal Airport in Accra Ghana some two hours later, ahead of the scheduled hearing of his petition filed on October 24, 2016, in the ECOWAS Community Court of Justice seeking an enforcement of what his lawyers describe as his fundamental human rights arising from his unceremonious removal from office.

He is expected in Nigeria soon for the hearing set for April 26, 2017.
Sam Sumana returned to Freetown Thursday April 13, 2017 from Ghana where he was residing since October, 2015, to register as a voter for the March 7, 2018 General Elections.   He confirmed that he registered as a voter in Freetown Friday April 14, 2017.

Sam Sumana also confirmed that his diplomatic passport was withheld at the Immigration Department at the International Airport, at Lungi on his arrival on Thursday April 13, 2017, for what an Immigration Officer told him was “on orders from above”.

In that regard, Sam Sumana added, “I plan to call at the Immigration office in Freetown this week and apply for a regular passport to enable me to travel for the hearing of my petition”.

Sam Sumana told this Writer that he did apply for an ordinary passport and was informed that the Immigration Department had “ran out of copies of ordinary passports” and on Tuesday April 18, 2017 he was issued with an “Emergency Travel Certificate” to enable him depart Freetown Wednesday April 19, 2017 for Ghana.