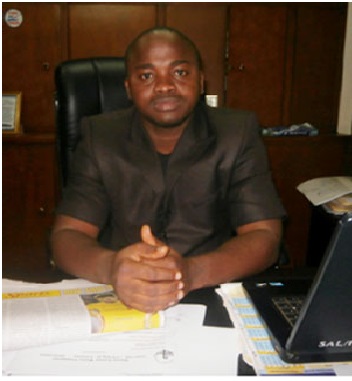 “I am ready to give them the support my Chairman is giving me,” Mr. Samuel Bangura assured, adding that for the last five years SALWACO has moved from the sleeping path to the statutory mandate to deliver.

The Director General cited the Three Town Water Project (TTWP) that was implemented under his management to provide safe drinking water for Bo, Makeni and Kenema cities in the Southern, Northern and Eastern Regions respectively.

Mr. Bangura stated that the RWSSP which is designed for Kambia, Kono, Pujehun, Bonthe and Koinadugu district is here to help the smaller towns to get safe drinking water, adding that the five districts were hard hit during the cholera outbreak in the country in 2012.

He described the five districts as riverine areas where the water is not pure, noting that even when you get a place to dig boreholes, the sanitation situation would not be encouraging to embark on such digging. “This project is here to save the situation,” the Director General assured.

In the project implementation, Mr. Bangura also spoke on community mobilization and community centralization, while he passionately appealed to representatives of the co-implementing partners – the Local Councils in Kambia, Koinadugu, Kono, Pujehun and Bonthe – to talk to their people to know how to sustain hygiene practice.

He lamented that water is still the major problem in the country and that there should be established standards for the drilling of water well, adding that government has to put guidelines to show how to dig and treat water well.

Mr. Bangura disclosed that Sierra Leoneans should be grateful to the African Development Bank (AfDB) for funding the RWSSP because the Bank has confidence in the Government of Sierra Leone and SALWACO.

“With that confidence, we will go ahead to advocate for more water projects so that the other seven districts will benefit from similar project,” the Director General said.

He assured that the two contractors for the project will be in Kambia in January 2016 to start the work, noting that the five-year project started in 2012 but because of the outbreak of Ebola Virus Disease (EVD), it was put on hold until the country was declared Ebola-free.

The Director General appealed to the people to take ownership of their own development and to help them design security to ensure the solar panels are not stolen.

Giving an overview of the project, the Acting Procurement Manager, Kaweni in his statement said the project started in 2012 but due to some stumbling blocks it was put n hold until 2014.

He said the project is designed to improve the lives of the rural poor, noting that the project was financed by AfDB, GEF, Government of Sierra Leone and the five Local Councils that are beneficiaries.

The Acting Procurement Manager disclosed that the project will provide improved water and sanitation for 625, 000 if SALWACO succeeds effectively in its implementation.

In his keynote address, the Chairman SALWACO Board of Directors, Hon. Robin Faley, emphasized the importance of the project as part of his responsibility to handle the water business in the rural areas with great diligence.

He lamented that 65% of the sicknesses reported in hospitals are water related and that water is the key to life.

Hon. Robin Faley said though SALWACO is doing extremely well in terms of its mandate, the government still gives subvention since the institution has not yet reached the capacity to be run as a company.

The Chairman however frowned on people who are unwilling to pay for water. “How can you sustain it if you don’t want to pay,” Hon. Robin Faley queries.

He disclosed that the total value of the RWSSP is approximately US$27 million though they need more support to deliver particularly to the rural people.

The Chairman therefore called for close collaboration of all key stakeholders involved in the project, adding that they don’t want further delays as AfDB stressed on intensifying the work.

“My role is to monitor the contractors and that is why I am here because I am a politician,” Hon Robin Faley said, noting that most projects failed because of lack of monitoring and the connivance of community people with contractors to steal materials meant for those projects.

Chairman of the symbolic handing over ceremony was the Chairman Kambia District Council, Samuel Sheikh Adekalie Sankoh, who praised President Dr. Ernest Bai Koroma for appointing three young and dynamic men to man the water affairs in the country – the Minister of Water Resources, Director General of SALWACO and Chairman SALWACO Board of Directors.

He appealed to the Director General for SALWACO to take over management of the Kambia Water Supply built from an US$88 million grants according to the DG.

Prior to Chairman Sankoh’s appeal, Mr. Bangura had earlier observed that the water facility for Kambia does not go beyond the town while other town and villages in the district continue to face acute water problem.