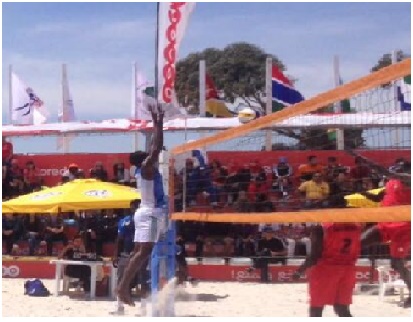 Sierra Leone lost their bronze medal match to the all Africa champions Angola. They were defeated in a two straight sets leading to Angola taking home the bronze medal.

The boys were already tired following a tough semi final battle against the fancy Moroccans. “We had no strength to fight on again” says Captain Abu Bakarr. But Coach Sorie Kamara expresses satisfaction with his team performance for reaching the semis of a high level tournament. However, host Tunisia defeated their North African rivals’ Morocco in a thrilling golden match that ended 2; 1, 26; 24, 23; 21, 17; 15. This means Tunisia has booked the only place available for Africa in Brazil Olympics.

Speaking on the phone line from Tunisia, Florence Amara told AYV that the team is in good spirit despite they were unable to book a place to Brazil. The team will return and start preparation for its next assignment, she said.