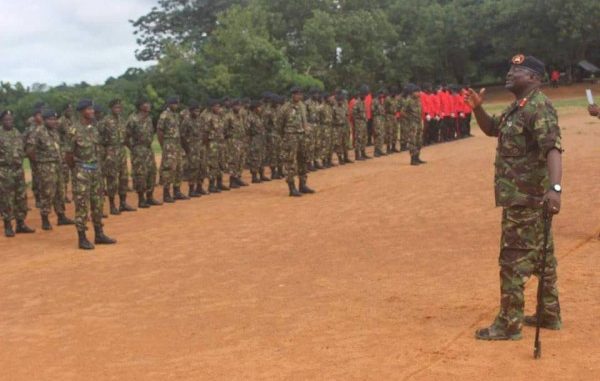 According to the charge sheet, the alleged rape occurred at off Hill Cut Road, Yerzbek in the Freetown judicial district, in the Republic of Sierra Leone, and that the suspect was arrested on 28 March 2017, by detective police constable, 103558 Kargbo M, and was subsequently detained at the Hill Top Police Station, before he was eventually charged for the offence of rape.

In her statement to the police, the victim name withheld, narrated that she recognized the suspect as a serving member of the Republic of Sierra Leone Arm Forces, and was attached to the Arm Forces Educational Centre (AFEC) in Freetown.

The victim further  disclosed that since she could no longer subdued to the suspect constant harassment, coupled with several tactics employed  to induced her, she informed her mother about what had transpired between her and the suspect.

Between the aforementioned dates, the suspect was alleged to have visited the residence of the victim at off Hill Cut road during night time, in furtherance of his machinated plan, entered into victim’s room, where she was sleeping with her younger sisters and force her on the bed, root out her pant and forcefully penetrated her sexual organs.

She also told police that after the suspect had raped her; she realized that blood was oozing from her private part, stating that she used the bed sheet to wipe blood streaming down her legs, but that the said bed sheet had been laundered.

After the whole incident, the victim said, she informed her mother about the sexual attack, she suffered in the hands of the suspect, who later accompanied her to the family Support Unit of the Hill Top Police Station.

The victim intimated that statement was obtained from her in respect of the allegation, and police medical request form was issued to her for examination and treatment at the rainbow centre, at the Princess Christian Maternal Hospital (PCMH) on Fourhbay road in the east part of Freetown.