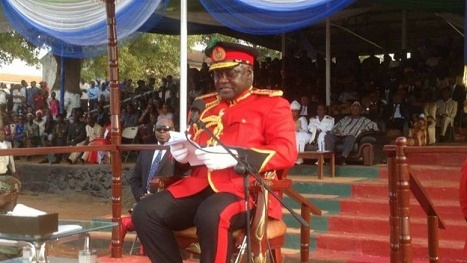 He said that he looks forward to celebrating Annual Armed Forces Day each year. He reminded his audience however that the story of the RSLAF has been a bitter-sweet affair until quite recently when the RSLAF engaged on overall transformation through enhanced and advanced training of all units. He said that in the past recent years the RSLAF due to its heightened training coupled with discipline and professionalism, the result has been a better and more focused military institution which is now contributing greatly to keeping the peace in countries such as Sudan, Somalia, Mali, Haiti, Lebanon and Nepal. He informed his audience that currently he has two battalions which he has put on standby for use by the United Nations for peace keeping missions. He added that all that remains now is to fully equip the men and women in this battalion with the requisite equipment and logistics so they would be better prepared to take up international duty when called upon to do so.

He commended all the officers and other ranks for maintaining discipline, loyalty and for not doing anything which has the potential to derail all the good work which has put the RSLAF on the international spotlight as a professional military. He highlighted that he is satisfied that the RSLAF lays premium on education and commended them for introducing French Language into the curriculum of all ranks. He also praised the RSLAF for staying neutral during elections and for their high discipline, service to the nation and for their loyalty.

He said that he and his government are very very serious about making the RSLAF better and better and that is why he is ensuring that work on the first phase of the Kambia Military Barracks will soon commence, while the Gondama and Wilberforce barracks phase two programme is underway.

Finally he warned the officers and other ranks against complacency and to refrain from acts which could bring back the bad memories of the country’s dark past.

The presentation of meritorious awards for long service, dedication, professional among other attributes to ten nominees formed the high point of the celebration. However, the audience were thrilled by acrobatic displays from RSLAF martial arts unit which performed karate, judo and taekwando. The Forces Reconnaissance Unit (FRU) commanded by Major Samura performed a splendid counter-terrorism demonstration to the applause of all present.

As all of this was going on the RSLAF Regimental Band Unit performed the beating of the retreat.