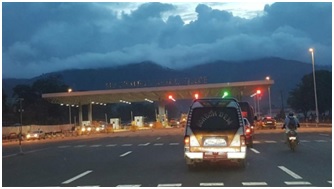 From the outset, we want to make it very clear to all Sierra Leoneans that while we do not have any personal interest in the toll road system, we have a right to take a position on it because it concerns Sierra Leone and Sierra Leoneans.

From what we have so far learned about the project, we want to believe that in spite of what some uninformed people will want you to believe, the toll road system has a lot of advantages and benefits for the country and on its people.

We believe that the toll will bring in more revenue for the country as all the money that will be collected on the road will be taxed and put into our Consolidated Revenue Fund. The toll system will also create a lot of employment for our young people, as well as help the Police in checking vehicles for smuggling activities and the trafficking of illegal drugs and weapons.

As a newspaper that believes in the well-being of this country, we have a patriotic duty to promote and support any good and well meaning initiative that comes into the country and by the same token, resist and condemn any initiative which we believe has the potential to negatively impact on us both as a people and a country.

While a debate of the merits and demerits of paying toll is actually needed and very much in place, what is however very sickening are the negative interpretations and conclusions that have been leveled against the project without any attempt by these so-called experts to first do a thorough study on what the toll road is all about.

Rather, they have just got up one morning, and proffered baseless, unfounded, mischievous and biased opinions against the toll system.

These prophets of doom have consistently subjected the Chinese Company that is constructing the road to a barrage of unprintable invectives and racial insults without ever attempting to interview officials of the company, the Seventh China Railway Croup, to get an understanding as to why a toll road and how it is going to be operated and what is going to be its advantages and challenges to the people of Sierra Leone.

It has been clearly established that the majority of Sierra Leoneans welcome it as they see it as one major way of raising revenue for the country. They also believe that the toll road will create a lot of employment for our young men and women. They have also mentioned the beautification of the road network, the speed control and security measures that the road will carry as positive aspects that must be commended.

In this light, as far as we are concerned, by the findings we have made so far, the China Seventh Railway Group is a credible company that means well for this country. By extension therefore, the toll system is well intentioned and will bring peace and prosperity to the country which is why we wholeheartedly endorse it.