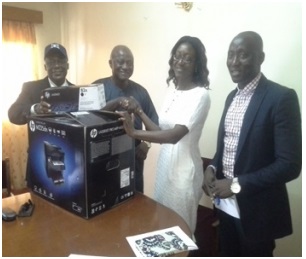 While making the donation, the Director PSRU, Sidratu Koroma (second from right in photo) said the donation is part of the Unit’s effort to providing capacity for Ministries, Departments and Agencies MDAs in order to enhance performance in government institutions.

According to a Ministry of Information and Communications report, Sidratu noted that her unit has been working with the Right to Access Information Commission since its inception to support it on records management and is poised to providing them with the necessary support.

She said the items were procured from a $17 Million funded Project meant for supporting MDAs to enhance their capacity and improve performance which PSRU is donating to institutions saying that she considers it worthwhile to donate to the Commission a desktop computer, a printer and a toner.

Receiving the items, the Chairman, Right to Access Information Commission, Unisa Sesay (second from left in photo) thanked the Director for providing the Commission with such a donation adding that the donation is timely as the Commission is new and is still trying to settle down.

The Chairman explained that the Commission is working on providing massive sensitization across the country so that people will be fully informed about the Commission and its activities to educate the general public about their right to request and access information from public authorities.

He therefore called on donor organizations to provide the Commission with the requisite support so that it will be able to roll out its activities and make the service useful to the public.

He further stated that the Commission has the powers of a high court and can constitute itself into a tribunal to look into matters brought before it and can levy penalties where necessary.