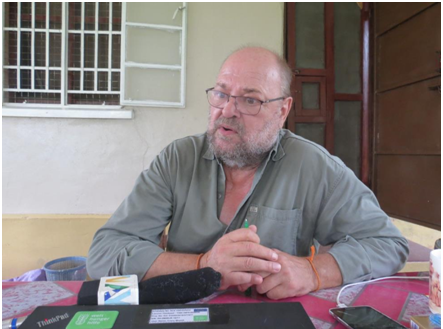 The objective of the project according to Franz Moistl WHH ProAct Project Manager is to promote sustainable agroforestry systems for tree crops like cashew, coffee and cocoa for improved quality processing and marketing of tree crops.

He said “our focus is to ensure average defects of cocoa and coffee exports are reduced with improved planting methods, marketing and value-addition.”

He also explained that the project will facilitate linkages between producers and international traders and processors to improve processing methods, product quality and promote the specialty of Sierra Leone forest grown products.

He said the project also organized training programs tailored for Agriculture extension officers of the Ministry of Agriculture Forestry and Food Security and provided tools for out planting and husbandry of tree crops in new/rejuvenated farms; through Farmer Base Organizations, farmer groups, government and private sector actors.

He said previously cocoa and coffee yields were very low below 200kg a hectare and which could be 600kg a hectare, however due to the project intervention yield has increased significantly with the new farming methods for less product defects.

He also noted that Sierra Leone cocoa was known for bad quality which caused huge deduction on earning in the world market price but through our work we have started seen defect decreased as low as 10%.

COOPI ProAct Project Manager Giacomo Mencari said since the intervention of the project 70 metric tons of cashews have been exported the first ever in Sierra Leone.

PRO-ACT also exhibited project activities at the Bo Coronation Field during a produce monitoring Board trade fair in early November 2017.

He said thousands of farmers have been trained on new planting methods, on processing and value addition and agriculture staff has also been empowered with training logistics and technical support.

Solomon Leigh Chairman Approach to Rural Development in Soweima Nongowa Chiefdom Kenema District said through the support from EU/WHH project several women and men work together in a cocoa block farm of 20 hectares where coffee and cocoa is planted along other fruits and vegetables, so that farmers can sustain livelihood from harvesting other produce to eat and sell without waiting for cocoa and coffee harvest.

At Teibo village in the Lower Bambara Chiefdom Kenema District Henry Sam said the project has helped to empower a farming group of 30 men and women farmers on cocoa breaking, cocoa fermentation, and cocoa drying in solar booths (Green House) to correct moisture and content.

She said “we also organize nutrition education and cooking classes, and address gender roles in households and community, which influence the adoption of good nutrition behavior and to also improve basic hygiene and sanitation practices at community level.

The project has helped to ensure average defects of cocoa and coffee exports are reduced.

Hassan Junisa a master farmer in Lower Bambara Chiefdom spoke about his new farming techniques in block farming which has helped increased his farm yield in cocoa and coffee production along fruits and vegetables with an increased income to sustain his family by paying school fees, buy food and also pay medical bills.

Hassan Moutada Capitol Trading Company Manager in Kenema Town is one of the leading certified exporters of cocoa and coffee to Europe he said since the intervention of the WHH/EU project some of the produce sold to them by rural farmers have an improved quality grade and production.

He said the project has helped to reduce produce defects by 80% as compared to the past.

He also explained that the company exports about two million tons of cocoa and coffee annually.

The produce he said is bought from farmers supported by the WHH/EU project in Kenema and Kailahun which has reduced defection of produce and production has also significantly reduced.

The WHH Certification and Tractability Expert for Sustainable standards George Muigai said small holder producers are trained on standards by operators to meet the required guidelines for certification.

He said certification officers verify standards of producers and traders so as to meet the European Union standards regulations and requirements for produce to be exported abroad with specific country requirement.