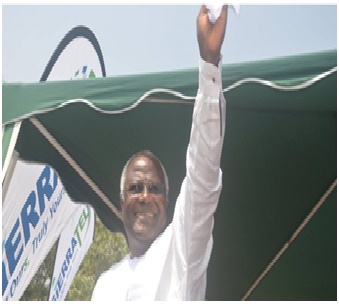 President Koroma informed the Ambassadors that he is visiting Brussels to thank the ACP Group and the European Union for their tremendous support to his government for the past ten years and by extension for their support to the people of Sierra Leone, especially during and after the Ebola and Mudslide disasters in 2014-16 and 2017 that nearly brought the country to its knees.

“I have come to thank you on behalf of my government and the people of Sierra Leone for your massive support and to also inform you that I have almost come to the end of my constitutional two-terms as President of Sierra Leone. I am now prepared to take my exit after the March 7th, 2018 elections and to handover to my successor”, he stated.

The President gave a rundown of where the country was before he ascended to the Presidency in 2007 and where the country is at present. “Though we are not yet there, but there has been tremendous improvement in all sectors including road infrastructure, education, agriculture, electricity, water supply, tourism, health, good governance and a host of other achievements. I am sure my Successor will continue from there”.

President Koroma informed his audience that after the convention of his ruling APC party a fortnight ago, the party members have agreed to choose Dr. Samura Kamara as the party’s Presidential candidate in next March’s election to succeed him.

“I am here to present to you my hopeful successor, Dr. Samura Mathew Wilson Kamara, who is presently the Minister of Foreign Affairs and International Cooperation in my government. But before that, he has also served as Governor of the Central Bank, Minister of Finance and Economic Development, Financial Secretary, has worked in the Commonwealth office and he is a Development Economist”, he described Dr. Kamara amidst deafening applause from the Ambassadors.

President Koroma was earlier welcomed and presented to the Ambassadors by the Chair of the Committee of Ambassadors and the ACP Secretary General, His Excellency, Ambassador Patrick I. Gomes respectively.

President Koroma wrapped up his two-day working visit with a Town hall meeting for Sierra Leoneans from continental Europe.

Addressing his fellow countrymen, the President stated that his trip to Brussels was not only to thank the EU and the ACP for their support, but to also thank fellow Sierra Leoneans living abroad for their support back home; to bid them farewell and at the same time present to them Dr. Samura Kamara as his heir apparent.

“I have trust and confidence in him to continue with the agenda of my government. I believe that Sierra Leone should continue in the path of democracy, development and the consolidation of peace”.

He assured of his government’s determination to provide the necessary resources for the conduct of a free, fair, transparent and credible elections.

“I want to ensure that when we shall win the next elections and Dr. Samura Kamara is declared the next President of Sierra Leone, everyone will be satisfied with the process”, he reiterated.

The Head of State assured all and sundry that the next elections will be a clear victory for the APC party.

“The people will vote for our party again based on what we have achieved so far as a government. And most importantly, I am ready and prepared to campaign vigorously throughout the length and breadth of Sierra Leone to ensure that the party wins the next elections on the first ballot. This is going to be my last political battle and those who know me will tell you that I don’t lose political battles and this next one will be no exception”, he assured his audience amidst standing ovation.

The President acknowledged the enviable role of Ambassador Ibrahim Sorie and staff of the Sierra Leone Embassy in Brussels for facilitating “such a memorable visit, which is the first overseas trip after the historic party convention”.