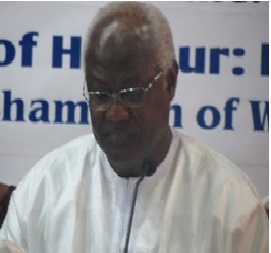 “The major civic education and consultation process undertaken by the CRC gave the people the opportunity to make meaningful contribution to constitutional change through many and varied recommendations,” he said and noted that the true hallmark of democracy is participation of the people and this is reflected in the manner in which the citizenry has participated in the work of the CRC.

Speaking following the presentation, President Koroma said that the remit of the CRC was to provide direction and scope within which the review process should take place, saying that he mandated the committee to ensure that it carries out its mandate in a fair, open, transparent and participatory manner as well as ensure the final outcome reflects the tolerance of the people of Sierra Leone amid “our political, ethnic, cultural and religious diversities.”

The objective of the exercise, the president stated, is to insulate “our nation from repression, from war and to align our laws with our aspirations of becoming a middle income country and a donor nation.”

President Koroma described the CRC process as a “baby” that should be cared for and nurtured too. “My Government therefore funded the constitutional review process because it is our baby; it is the initiative of my Government to respond to the long standing recommendation of the Truth and Reconciliation Commission to review our instrument of governance; it is my Government’s response to the call by the Sierra Leone Conference on Development and Transformation to bring our constitution up to speed with our current and future development aspirations,” he emphasized.

The president expressed appreciation of the efforts of every single member of the CRC, the various sub-committees, the stakeholders and the general public. He also thanked the United Nations Development Programme, the European Union and the Department for International Development for their support to see the process through.

President Koroma assured of government’s commitment to the process and promised to quickly look into the report and come out with a White Paper which will be submitted to Parliament and subsequently put before the people for a national referendum. “This will then give way for the people, in whom sovereignty lies, to decide the fate of this proposed covenant,” he said.

Commenting on the next general elections, President Koroma pointed out that the Civil Registration Authority has begun its public engagement on its own role in the electoral process; the National Electoral Commission will conclude the boundary delimitation and chiefdom de-amalgamation process, and assured that government and all stakeholders are working very hard to ensure that all these equally important processes fall in place to have timely elections. “This is the renewal we have undertaken as a nation and however tedious this may be, one thing is clear, together we are on track in building our democracy,” the president said.

President Koroma went on to state that the conduct of the next presidential elections has been clearly defined and stipulated by the 1991 constitution of Sierra Leone, and pointed out that there is no need for undue speculations and no need for unnecessary tensions. “You don’t need to create tensions, the elections will go on as stipulated by the 1991 constitution, and the National Electoral Commission, the National Registration Authority and every stakeholder is already involved in the process,” he said. He disclosed that pronouncement for the next general elections will be made in accordance with the provisions of the constitution.

Chairman of the CRC, Justice Edmond Cowan said the CRC was given the responsibilities to review the constitution taking into consideration emerging issues, ambiguity of laws, democratic gains, the TRC Report and the Peter Tucker Report. He added that his committee traversed the length and breadth of the country and held consultations with all stakeholders. The people, the chairman said, are sovereign and the constitution is supreme, and therefore expressed hope that the views of the people are contained in the report.

Delivering his statement, the Attorney General and Minister of Justice, Joseph Fitzgerald Kamara said the submission of the report marked another epoch in the democratic process of Sierra Leone as the country steps forward in engaging her people in the decisions that directly affect their welfare. He stated that democracy is about creating the enabling space and environment as far reaching consultations were held on issues, but not limited to the eligibility criteria for the Office of the President, the justiciability and recognition of human rights, citizenship, and unicameral system of parliament among others. The Minister noted that the enactment of a new constitution will improve good governance, political and economic stability and contribute public confidence in governance systems and processes, strengthen human right protection and improve Sierra Leone’s international standing as a progressive and democratic country leveraging peace and security in the sub region.