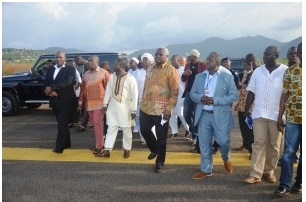 The president also made an on the spot visit at the Freetown Central Lorry Park and the Hastings Airport. His visit at Mile 6 was in sync with government’s aspirations to provide a safe living environment for the September 16 flood victims in Freetown.

The security chief went on to state that the families that have preferred to stay with their families will be given rent subsidy of Four Hundred Thousand Leones with a monthly package while those that will be relocated at Mile 6 would be given two months packages because of the new environment.

In another development, President Koroma also visited the Hastings Airport to follow up on the issue of assigning land for the Ministries of Health and Sanitation and Social Welfare, Gender and Children’s Affairs. The president stated that his visit was to help make an informed decision and to determine whether to continue with the operations of the airport and the two ministries simultaneously. He said in the fullness of time, he will visit the Sierra Leone Airport Authority to inspect ongoing rehabilitation of facilities at the Hastings Airport.

President Koroma also visited Clay Factory at the Freetown Central Lorry Park where he inspected facilities around the park.