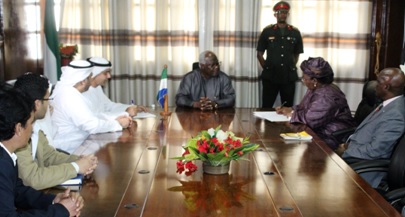 President Koroma welcomed the delegation and expressed appreciation for their support, stating that the support provided was in sync with government’s programmes in meeting the needs of the people. He noted the engagement with the Sierra Leone Water Company (SALWACO) and described it as a great intervention in the provision of services that will help to eliminate water borne related diseases affecting women and children. Commending the Emirates for their support in the fight against the unprecedented Ebola Virus Disease, the president described the support to the Ola During Hospital as a great accomplishment in providing quality health services and assured the delegation that the support will get to the targeted beneficiaries. He also expressed hope for enhanced collaboration between the two countries.