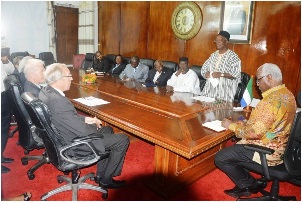 Addressing the delegation, President Koroma said the Ebola outbreak affected the socio-economic fabric of Sierra Leone, isolated the country and has a devastating toll on the economy. As government has launched the post Ebola recovery programme, he said, government is committed to revitalizing the health sector and ensuring a collaborative engagement with the international community in rolling out the recovery programmes.

He went on to explain that the purpose of the recovery is to get the economy back on its feet, improve on social service delivery, and build a more robust health sector as well as an educational sector that will guarantee a better environment for education.

He informed the delegation that Sierra Leone is a resilient nation saying that after the civil war the country quickly moved from war to peace and growth. “The transformation was quite remarkable and we are an example of a success story in the United Nation’s effort in transforming war-torn countries from war to peace and growth,” he said, and expressed great determination to move the country from Ebola and reengage with the Agenda for Prosperity, while noting the significance of strengthening the engagement with the European Union in rolling out development programmes.

The president also stressed the need for greater engagement so that government continues to implement development programmes set out in the Agenda for Prosperity. He assured the delegation that government will adhere to the benchmarks, adding that the presence of the delegation in the country guarantees the confidence on government.

Making a statement, the Head of the European delegation Mr. Norbert Neuser informed that the delegation is in the country to have first-hand assessment of the impacts and challenges of the Ebola outbreak. He acknowledged President Koroma’s leadership in leading the fight against the outbreak and disclosed that the delegation will be travelling to Makeni to assess the situation on ground.