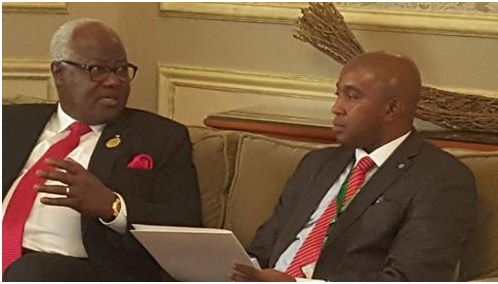 The first was a state visit on the 6 May, 2017, on the kind invitation of the Saudi Monarch and Custodian of The Two Holy Mosques, King Salman bin Abdulaziz Al Saud and the second was on the 20th May, 2017 – also a special invitation by the Saudi King to attend the just concluded Arab – American Islamic Summit – a summit between leaders of Muslim majority countries and the United States President, Donald Trump, which aimed to decouple Islam’s image from terrorism.

It should be also noted that His Excellency, the President, paid a state visit to Turkey on 8 May, 2017 after concluding his first visit to Saudi Arabia.

It was on the backdrop of the above high profile visits to these two countries of vital importance to Sierra Leone that I had to engage His Excellency, Dr. Ernest Bai Koroma, on a one-on-one interview at the Sheraton Hotel in central Riyadh where he and his delegation were hosted early this week.

The importance of the Arab – American Islamic Summit

When I asked the President about the significance of the Arab – Islamic American Summit to Sierra Leone, he stressed the importance of the summit, which constitutes opportunities to form strong partnerships to fight terrorism; which he says, is not only a regional threat, but an international threat, indicating any effort to fight the scourge must be on a global scale.

Hear the President: “Terrorism is not a threat to one region or country; rather, it is a threat to the entire world.” Ernest Koroma added that: “The world, therefore, should partner in earnest with whoever fights it so that this scourge gets totally eradicated in order to give people a chance to live in peace, security and tranquility – a basic human need without which life becomes meaningless.”

As Minister of Defence and Commander- in- Chief of the Armed Forces, Sierra Leone’s President called upon all leaders to join the King to combat terrorism in concerted efforts in order to uproot what he described as a “cancerous evil” that has caused enormous havoc in so many countries around the globe. He stressed that; terrorism, whether local, national or global, ought to be fought robustly to put a halt to the menace that it often poses to the lives and properties of innocent peoples.

By the same token, the Head of State urged world leaders to ensure that nations across the globe live in peace away from these terrorist attacks that have cut across boundaries. He cited sister countries like Nigeria, Mali and Cote D’Ivoire as countries that have fallen victims of such terrorist attacks in the West African region. Thus, to save the Western African region from repeat of similar carnage to other countries in the region, the Sierra Leone Head of State suggested that the concerned leaders should put in place precautionary measures to avert any undesired happenings in the future in an aim to protect their nations from the evils of terrorism.

On his two visits to the Kingdom, Sierra Leone’s CEO considered them as important and timely. He described the visits as successful by all standards. He went further to say that he found it worthwhile to discover the significance of Saudi Arabia. The President says his Government has resolved to pursue all diplomatic channels to improve Sierra Leone’s bilateral ties with the Gulf States and the Arab World.

He described his meetings with the King Salman, the Deputy Premier and Crown Prince, His Royal Highness, Mohammed Bin Naif Bin Abdulaziz and the marginal meetings he had with Sierra Leone’s multilateral partners, the President of the Islamic Development Bank (IDB), His Excellency Dr. Bandar Bin Mohammed Bin Hamza Asaad Al Hajjar, the Secretary-General of the Organization of Islamic Cooperation (OIC), Dr. Yousef Bin Ahmed Al-Othaimeen, the Director-General for the Saudi Fund for Development (SFD), among others as very fruitful. He praised the Saudis for their unique hospitality, affability, and friendliness.

His Excellency expressed not only his willingness but also his readiness to strengthen Sierra Leone’s diplomatic and bilateral relations with the Gulf States in general and with Saudi Arabia in particular. He furthered that there is every need for Sierra Leone to work closely with Saudi Arabia for the interest of both countries.

The President noted that the Gulf States are countries endowed with huge and numerous potentials and business opportunities which should be exploited to strengthen Serra Leone‘s bilateral and diplomatic relations with the countries in the Gulf Region. His Excellency intimated that it was because of this vision in his mind that he opened Sierra Lone Embassies in both the State of Kuwait and the United Arab Emirates in addition to the Embassy of Sierra Leone in Saudi Arabia which has been in place for almost four decades now.

On Turkey, President Koroma underscored the need for Sierra Leone to partner with that Eurasian country in a number of domains. He intimated that he and the Turkish President, His Excellency, Recep Tayyip Erdogan have both expressed their willingness to open a Turkish Embassy in Freetown and a Sierra Leone Embassy in Ankara in the not- too- far- distant future. The President also noted that Sierra Leone’s diplomatic and bilateral relations with Turkey are growing on a healthy and steady footing. He expressed his readiness to work with Turkey because he believes that Sierra Leone stands to gain a lot from Turkey in terms strategic development and expertise in a number of sectors.

S/Leoneans encouraged to work as a team

On his personal achievements since he was elected President in 2007, His Excellency cited health, education, infrastructure, agriculture, energy, as some of the areas which he has improved on. Before the Ebola outbreak intensified, the President said, Sierra Leone was making remarkable economic progress. He also hastened to say that the Ebola epidemic had devastating effects on his country’s economy. “But with the end of Ebola, we have started attracting private sector investment.”

He said despite the numerous challenges and the difficult situation that he faced since he took over, he was able to achieve something for Sierra Leone.