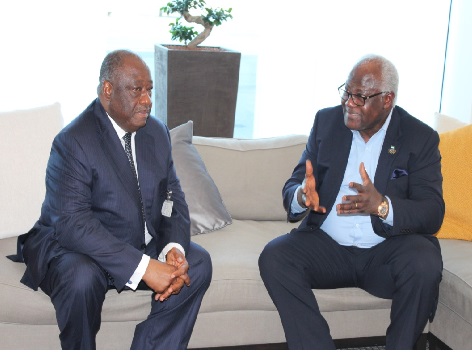 The Head of State made these applauding remarks on the EU last Saturday night, October 31st in his Sheraton Hotel suite in Brussels on his way back to Freetown after attending the third India-Africa Summit in New Delhi. He was addressing both the diplomatic and local staff of the Sierra Leone Embassy who had paid him a courtesy call.

President Koroma further praised Ambassador Ibrahim Sorie and staff for the exemplary transformation of the image of the Sierra Leone Embassy in Brussels since his assumption of office a little over two years ago, a feat he attributed to the astute leadership role of the Head of Mission and the cooperation of the rest of the staff.

The President disclosed that the Embassy in Brussels is one of the few missions he “receives regular updates from its Ambassador at anytime he passes through”, and further urged Ambassador Sorie not to relent as the mission is the eye of Sierra Leone to the EU and the world.

President Koroma gave a vivid picture of the economic and human damage the Ebola outbreak has inflicted on the country but expressed optimism that, if by this coming Saturday, October 7th no new case is recorded and WHO declared the country Ebola free, Sierra Leone will soon return to its pre-Ebola positive economic performance. He assured that both Shandong Iron (formerly African Minerals) and the Marampa Mines will soon become operational, and most probably , an Indian business firm has expressed firm desire to take over the operations of Addax Bio-energy in Bombali.

Earlier, Ambassdor Ibrahim Sorie gave a comprehensive briefing to the President on the activities of the Embassy, ranging from the newly acquired property that will be handed over to the government of Sierra Leone in February, 2016 and the proposed harmonization of the two buildings as well as the bilateral and multilateral activities of the mission.

In a related development, the Head of State gave audience to the Kuyembeh family to console and further expressed his heartfelt condolences over the irreparable loss of their younger brother, Peter Kuyembeh who was a worker at the Sierra Leone Embassy.