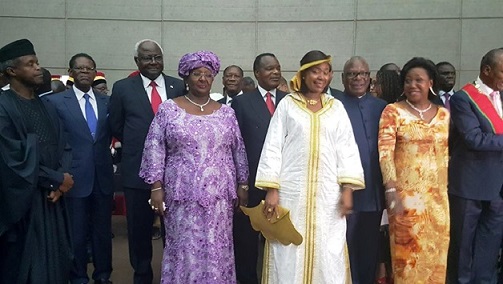 During the tour, President Koroma visited K-Energy (an international company specializing in the supply and installation of mobile autonomous power plants) to acquaint himself with the services provided by the company geared towards improving electricity generation and distribution in Sierra Leone.

The president and entourage also paid a visit to the Diamond Plaza where he was taken on a conducted tour of the sprawling complex located in Kipee, Conakry. Prior to the visit to the Diamond Plaza, President Koroma also visited the construction site of a four star hotel in Annville to get first hand assessment of the project as a similar project is currently underway at Aberdeen village in Freetown. The hotel is a 187 bed facility with five floors.

He urged the project manager to speed up the construction of a similar hotel in Sierra Leone to match the speed it’s using to do same in Conakry.

In another development, First Lady Mrs. Sia Nyama Koroma held a bilateral meeting with her Guinean counterpart, Hadja Djene Kaba Condé at her Villa in Cas de Belle-Vue in Conakry.

President Koroma and entourage returned to Freetown on Tuesday 15 December, 2015.