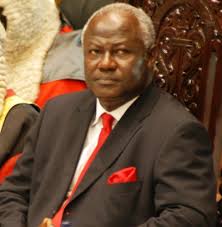 As many other African countries, illegal, unregulated and unreported fishing has been a major challenge facing Sierra Leone’s fisheries sector, thereby depriving the country of much needed revenue for development activities.

In an effort to curb the practice, the Minister of Fisheries and Marine Resources, Captain Momodu Allieu Pat-Sowe said the procurement of the vessel named Sorie Ibrahim Koroma, is a demonstration of the Government’s determination to combat illegal fishing and promote the conservation and management of the country’s marine resources.

He described monitoring, control and surveillance (MCS) activity as one of his ministry’s flagship programmes; adding that the new vessel will also conduct scientific research on marine resources. He assured the government plans to provide more of such vessels. The Minister was confident that the new boat will minimize the rate of illegal fishing, piracy, human trafficking and other related crimes on the country’ territorial waters. He also said there is need to train more Sierra Leoneans in fisheries and marine related programmes.

Chairman of the Parliamentary Oversight Committee on Fisheries, Honourable Patrick Foya described the initiative as ‘fantastic’; applauding the government for the support. He pledged his Committee’s continued support in ensuring that the Ministry overcame its challenges so that it could contribute to national development.

Another member of the Committee, Honourable Abi Kaloko also expressed satisfaction over the arrival of the boat and expressed hoped it will help address illegal fishing.

Director of Fisheries, Mohamed Bushura Cole noted his Ministry will put proactive measures in place that would ensure the country’s marine resources are well controlled and monitored.

The newly acquired 25-metre vessel is well equipped and with a capacity to cover over 200 nautical miles at a very short period.