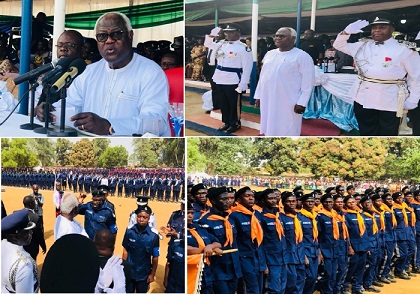 “My Government has further made frantic efforts in promoting women’s empowerment in the Sierra Leone Police as exemplified by some of the women that hold key decision making positions both at national and local managerial levels. This is in sync with the United Nations Security Council Resolution 1325 and is also part of my Government’s resolve to enforce international provisions on matters of security and the active involvement of women in the security sector,” President Koroma said.

The president pointed out that apart from empowering women within the ranks of the police force, his government has taken action to improve the general conditions of service of the police first by implementing salary increments for all serving members; “and by reintroducing rice supply to every serving member of the force including recruits passing out from this training school.” He further added that the country was proud of the participation of the Sierra Leone Police in international peacekeeping where they have been serving as worthy ambassadors of peace.

He said government has provided budgetary allocation towards the construction and establishment of a Sierra Leone Peacekeeping and Law Enforcement Academy at Makump, adding that an Act of Parliament formally establishing the academy has been enacted and the construction is in progress. He thanked development partners for their unflinching support to sustaining the Sierra Leone Police as ‘A Force For Good’.

President Koroma used the occasion to reiterate government’s commitment to ensure the SLP is adequately resourced to meet the task ahead of them relating to policing and maintaining peace and quiet before, during and after the March 7th general elections.

He expressed profound appreciation to the Inspector General of Police and the Executive Management Board members for making the occasion possible. “And while I congratulate the recruits, let me also encourage you to be of best conduct and professionalism at all times. Those two attributes constitute the surest path to the attainment of your aspirations in the police force. To the lecturers and the Drill Masters whose efforts and energy have allowed the recruitment process to go on successfully and unhindered, I thank you all,” the president stated.

In his overview of the state of affairs of the SLP, Inspector General of Police Dr Sahr Richard Moigbe described the ceremony as germane to the overall effort in providing an efficient and effective service delivery that meets the needs and expectations of the people of Sierra Leone. Training, he said, is the foundation for capacity building and professional development for better service delivery. The IG went on to note that the recruitment process of those passing-out today started early in 2014 but was halted due to the Ebola outbreak. “We continued in 2017 and recruited a total of 2,383 recruits, part of that figure (1,008) will today pass out with the other batch currently on the job training to follow subsequently in another passing out ceremony,” he said, and thanked President Koroma and his government for providing the necessary funds despite the global and national shocks impacting on the nation’s economy with competing demands.

Dr Moigbe also informed that this batch of recruits is unique because 28% of the total of 1,008 are university graduates. He further added that among the recruits are specialist recruits such as medical doctors, lawyers and engineers, saying that other university graduates will be considered for promotion opportunities in due course after successful completion of their time framed probation and mentoring tenure in the force. The IG also urged all police personnel to be non-partisan, impartial, fair, neutral, professional and maintain the corporate image and integrity, the public trust and confidence in the SLP.

Delivering the vote of thanks, Deputy Inspector General of Police Dr Al Shek Kamara disclosed that recruits passing out today have been trained in several disciplines, including the study of the nature of duty and obligation. He noted that the SLP attaches great premium to discipline as it is the bedrock of policing. “For that reason, not all the recruits are passing out today as some are in cells here on Camp and at the CID Headquarters for Breaking Barracks and for gross indiscipline respectively. For those recruits that have successfully passed out of the Training School today, I say congratulations!! But note the words of an anonymous writer: – “Success is not final, failure is not fatal; it is the courage to continue that counts”.