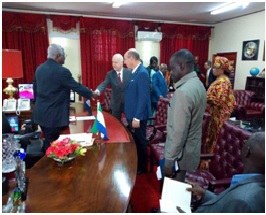 President Koroma said the change of the company from Airtel to Orange Sierra Leone was in sync with government’s quest to move forward with the ongoing national transformation, and expressed optimism of Orange SL’s global experience and capacity to positively impact on the telecommunications landscape in Sierra Leone. President Koroma encouraged the management of Orange SL to connect people within the country and endeavour to provide affordable and quality service as well as ensure value for money is fully realized. He added that there are opportunities to further enhance the transformational trajectory of the country.

CEO Sonatel and Chairman of the Board of Directors Orange Sierra Leone Aliosene Nyida informed that his company operates in twenty-one countries in Africa. The CEO Orange Group, Africa and the Middle East Mr Mettling described Orange as a company with huge international capacity, and therefore called for government’s support.