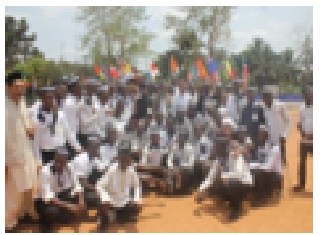 The Jasal Salana conference was honored by President Ernest Bai Koroma including ministers of state, Mayor of Bo city  and other  guests from different countries in Africa and beyond.

Speaking during the conference in Bo city,  President  Ernest Bai Koroma first congratulated the Ahmadiyya mission in Sierra Leone for their enormous contributions during the outbreak of the Ebola virus in the country and also thanked them for capacitating the human resources  with medical equipment to fight the disease.

The President also elaborated on the commitments and disciplines the Ahmadiya mission has maintained since its establishment in the country by executing what he called, the values of Islam making reference to the theme of the Jasal Salana “justice and peace”. President koroma said that it is because of the existence of justice in the country, that is why there is peace  and therefore reminded Sierra Leoneans present  to continue to uphold  peace which he said other countries around the world lack.

A representative from the Ahmadiyya Muslim Community in the world, Mr. Latif Ahmad spoke on the importance of the Jasal Salana conference and the blessings involved in it and  reminded Muslims to believe in Allah and the Holy prophet Muhammad (S.W.A) who he said was very obedient and steadfast in the course of Islam stressing that Islam is a peaceful religion in the world.