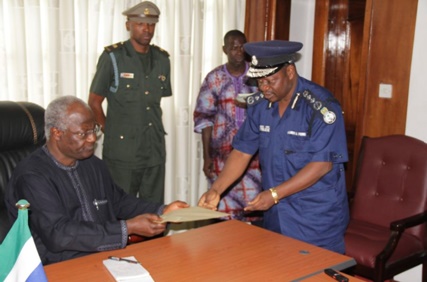 Maada Bio is also one of the nine contenders of the 2018 SLPP presidential candidacy.

According to  report by Umaru Fofana in Freetown, the chief of police in eastern Sierra Leone – AIG Karrow-Kamara, said that the death is related to an intra-party political dispute among members and supporters of the opposition SLPP in Kenema.

AIG Karrow-Kamara  said that the alleged assailant is a supporter of retired brigadier Julius Maada Bio, and the victim was supporting John Oponjo Benjamin.

An emergency response expert, commenting on the photo of the stab wound released by the police, said: “The victim was stabbed so badly and deeply on the back that his intestines came out through his back. This was a massive and probably jagged knife made with the intention to kill.”

Unconfirmed report says that the retired brigadier Julius Maada Bio is distancing himself from the murder and is calling for a police investigation into who murdered the young man and the circumstances of his death.

It is understood that Julius Maada Bio was on the eastern radio in Kenema where he ‘condemned all forms of violence and intimidation, urging the police to investigate and prosecute anyone found wanting of perpetrating violence irrespective of camp or political affiliation.’

In a separate and unconnected development, the Alie Kabba presidential aspiration declaration event is going ahead as planned in Kenema.

According to the Alie Kabba team, the event started at 10am this morning at the Kenema City Hall, Reservation Road, off Hanga Road – a few yards from the city’s police barracks.

The editor of the Sierra Leone Telegraph this morning contacted Mr. Alie Kabba, following the breaking news about the tragic death. He informed the editor that he was safe and well, and looking forward to the declaration event.

Mr. Kabba was asked about the tragic death of the young man. He said he was saddened to learn of the death of such a young man.

And he urged the police to thoroughly investigate the circumstances of his death and bring those responsible to account. Kabba expressed his deep condolence to the family of the dead young man.

“I don’t have details about what happened at the moment. I will get back to you after meeting with district party executives this morning,” said Kabba, a strong and much respected contender for the presidency of Sierra Leone in 2018.

This is the latest from the Alie Kabba event:

He is painstakingly laying out details of  his positive plans for the country, after strongly condemning the  unfortunate incident that led to the murder of a young SLPP member in Kenema, yesterday.

Alie also extended his condolences to the family and friends of the young man who was murdered “in the name of the vilest form of politics.”

It should be pointed out that the Alie Kabba Campaign had organised and planned to unveil a big campaign event in Kenema today during which Alie Kabba was poised to make a public declaration of his bid for the Flag of the SLPP and Presidency of Sierra Leone.

Crowds had started converging on the town since Tuesday this week when the well organised program was kicked off with a football tournament played  in honour of Alie Kabba.

The tournament was won by the “Ex Kamboi Eagles Professionals” in the final that was played in the Police Barracks ground yesterday evening.

The declaration, which was to be held today, was to have been the highlights of the week-long occasion.

This was scheduled to have been followed up by grand “Campaign Launching Programs” in the other Eastern District headquarter towns of Kailahun and Kono, before moving on to the South and then the North, and ending up  in the Western Area.

But  now it appears that some rogue elements in the SLPP have gifted the APC the perfect “excuse” to scupper our program and try to stifle our voice.

However, Alie Kabba is fighting on, as best as he could. Right now the Star Line Radio has linked up with  Eastern Radio, Gola Radio and all the satellite radio outlets in the Eastern Region to give people the chance to listen to what Alie has to say about his campaign and the direction of the country.

Meanwhile, Karrow Kamara, the police boss in the Eastern Province has put all political gatherings on hold following the alleged incident which took place in the township yesterday.

According to reports making the rounds, a well known supporter of one of the intending SLPP aspirants, a certain Mr. Mohamed Fonnie, stabbed and killed a member of “a rival” support group.

The majority peaceful SLPP members are greatly appalled that this hideous factional infighting is so savagely pulling us apart, and smearing everyone else in the party with the “violent and lawless” imagery that is traditionally rightfully associated with a RED (blood-dripping) APC party.

But we the Peaceful Party Members will loyally sludge this out and soberly stride on to victory. For as Alie Kabba has constantly  pointed out, “democratic competition should not be about stones and knives, but brain  and vision, as well as ultimate sincerity and dedication to the causes that matter to the 99%”

We believe that unfortunate incidents like this murder also have the unintended consequence of increasing awareness away from the sad mindset that is wont to flaunt the obnoxious notion that  “only might is right”. For it is not.