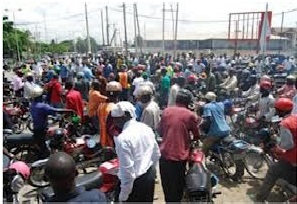 In a bid to curtail some of these disturbances, the new police traffic management led by Chief Superintendents Patrick Johnson and coordinated by Superintendent A Dumbuya, assisted by the Freetown Track West ASP Bangura, has widely engaged the motorbikes riders at their various parks across the city to sensitize them on how they should operate within the ambit of the law.

They have emphasized to the riders that they should avoid plying along the central business district areas that are almost always congested.

The riders, they emphasized, should always use safety gears like helmets and observe traffic signs.

The police cautioned them to desist from overloading and over speeding and asked them to decently dress and behave at all times.

The bike riders were asked to regard their trade as an official job guided by high standards.

Forming part of the sensitization delegation were the bike riders regional chairman, national secretary general, and a representative from the new insurance pool, Idrissa Sheriff, who assured them that they can access insurance only if they abide by the traffic rules and regulations.

The bike riders assured the police that they will do their best to abide by the traffic rules and regulations, while calling on the police to stop arresting them unlawfully.