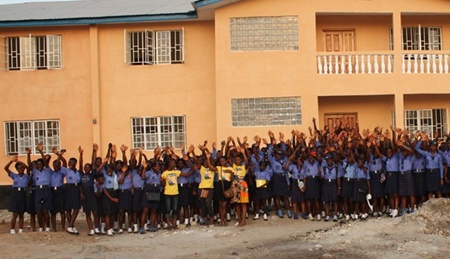 The school was opened in September 20, 2009, but it took its first BECE in 2012 and for the first time preserved its name by brandishing Rotifunk in a good light after topping the results of that year.

Since then, it had made remarkable glory in academic chase, converting girls, who were potential breed to help on the farm, to meaningful citizens with brighter hope for the future.

Proprietor, Alton Bendu, told the celebration that he visited Rotifunk in the early 2000s and was disappointed in many things. The most evident was the state in which girls were being impregnated and their dreams crushed.

He said he was also frustrated to see the Rotifunk Government Hospital lying in ruins after being burnt down by rebels.

“It’s because of these that I became determined to open a girls’ school, securing funds from Norwegians friends to help in the venture”, Bendu said.

He further stated that he had renovated two schools in the Rotifunk township – Walterschultz Memorial School and Saint Albert Primary School – adding that he had provided Walterschultz with furniture and modern roofing, shipped home from Norway.

He expressed satisfaction that he had been able to create jobs for Rotifunk community, employing local teachers who were directly and solely being paid by himself without government assistance.

A cross-section of the people of Rotifunk said they were happy and proud to get the first girls’ school in their chiefdom and were satisfied that the school was living up to expectations, adding that that was not all, but that Mr. Bendu was also able to renovate the Rotifunk Government Hospital and donate tonnes of surgical equipment to the hospital and brought Norwegian medical experts to train their local medical practitioners

“These are the kinds of people Sierra Leone needs to embrace. The man is selfless and patriotic. He needs to be encouraged,” a stakeholder from Rotifunk said.

To boost learning and support government, Alton Bendu, donated school materials to schools in Freetown and gave out over hundred scholarships to vulnerable children to keep them in school. He had also provided sporting gears to sporting associations in Freetown with the Sierra Leone Karate Association prominent among them.