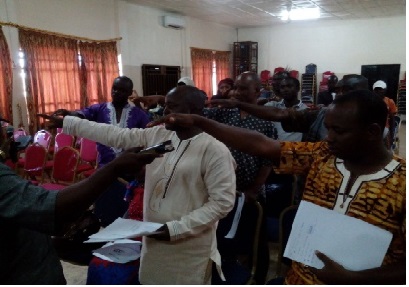 The committee’ oversight functions in the provinces which lasted for eight days targeted a range of issues which include, the use of road maintenance funds allocated to Councils by the Road Maintenance Fund Administration for the construction of feeder roads, health, education and Agriculture.

The aim of the inquisition was to elevate the stewardships of Local Councils with regards the utilization of government and donor funds to ascertain whether those funds were expended judiciously to benefit the people of Sierra Leone, and to further underscore challenges gravely impeding on their operations, and most importantly, to proffer recommendations that will gear towards surmounting their challenges which in turn will enhance good governance.

With regards the use of road maintenance fund, the committee observed that, despite funds were made available to the various councils by RMFA for the construction of feeder roads, but  they were  unable to embark on any construction work due to the deadly Ebola scourge in the country, as all attention were directed towards the Ebola fight. Nonetheless, the Chief Administrators of the various councils have assured the committee of kick starting the project in November this year as procurement processes had almost completed

The team also observed that, another key factor responsible for the slow pace of the construction work on feeder roads was the late allocation of funds to commence the project, coupled with the lack of adequate subsidizes to fast track the entire project.

In the area of Agriculture and Education, the team observed that, nothing much was done in those sectors due to the scourge, as schools were closed down and all agricultural activities countrywide came to a halt

In the area of Health, the committee acclaimed the councils for the significant progress made in the fight against the deadly Ebola Virus Disease that had devastated the lives of many Sierra Leoneans including prominent doctors and nurses, and at the same brought the government’s developmental strides to a standstill.

What was clearly evident during the entire hearings was that, the Chief Administrators and their Finance Officers of all Local Councils countrywide could not give detailed financial statements on their income and expenditure for the 2015 financial year.

As a result of that, the Chairman of the Committee, Hon Hassan Sheriff has sturdily instructed all heads of local councils to put together all relevant financial documents including their bank balances for the year 2015 for thorough inspections by the Committee during the appropriation hearing of the 2016 budget which is expected to be delivered in Parliament by the President in November this year. Failing which, the Committee will withhold their budgets until the proper thing is done to the letter.